Recently I received an email which began: ‘My wife thinks I’m absolutely mad!’ It went on to explain: ‘I’ve had one of the most fabulous months of my life – I’ve been in heaven re-reading all 14 Kydd books. Mentally I’m now sailing across the North Atlantic on my way back to the UK after being recalled from the Caribbean. I can’t wait for the next volume of the Kydd adventures – Pasha sounds so exciting!’
The email came from Graham Cooke, the September Reader of the Month. Graham is a retired company director and former Merchant Navy officer – and now splits his time between Spain and the UK.

Inspired by my book Victory, earlier this year he and his wife took their grandson to the Portsmouth Historic Dockyard and toured over HMS Victory. And Caribbee led to an exotic cruise…

Taking in HMS Victory with his grandson

“I have loved every one of the Kydd books! They have each been a wonderful tale of the adventures and development of Thomas Kydd. The overall feeling I get from reading these 14 books is that the sum is greater than the individual parts!

My next door neighbour gave me the first three to read whilst on holiday. He had intended to read them, but didn’t have the time. I was hooked as soon as I picked up Kydd. The detailed description of life on board the old Duke William was captivating. Meeting the diverse characters – but especially Joe Bowyer – along with the exciting plot made sure I was reading Artemis immediately!

Seaflower was truly enjoyable. Such an adventure for everyone around the Caribbean. Kydd’s experiences at the Antigua naval dockyard motivated my wife and I to go on our first Caribbean Cruise. Our visit to the Nelson dockyard was so exciting. We had lunch in the Copper Store building and I enjoyed finding the Sail Store where the sultry Sukey tempted Kydd beyond his powers of self-control.

‘Victory is impossible to put down!’ 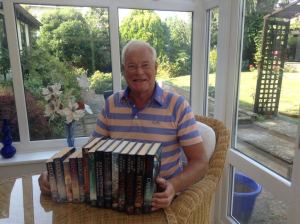 With his treasured Kydd collection

I could expand on my feelings for each book, however my personal favourite has to be Victory. It’s full of seamanship and fantastic descriptions of the dreadful conditions men had to endure in a full-blown sea battle in the early 1800s. Cannons firing with deafening concussion and confusion in the confines of a gun deck. The blood and savagery of battle. The need for rapid firing and re-loading of the cannon. The exceptional courage and leadership of Lord Nelson. His determination to destroy the French fleet, enough to abandon his Mediterranean station and chase them across the Atlantic and meet them in such a decisive battle. His men were committed to doing all they could for him and their country. The book is written in such a way that it is difficult to distinguish between fact and fiction and impossible to put down! Fantastic! 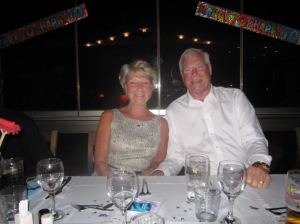 Graham and his wife Lynda

There are so many fantastic characters in the Kydd saga. Sergeant Dodds comes to mind with his precise military bearing. The dark temptress Sukey has to be there in the thought process. The anomaly that is Mr. Buckle caused an unusual amusement. The quiet Tysoe is such a loyal servant and has always been there to ensure Kydd does not bring shame on his officer status. Cecilia Kydd has been a constant figure in the adventures. A stable sister to Thomas and, hopefully, a good wife to Renzi at some point. Who could forget Lord Nelson? His presence in the books Quarterdeck, Tenacious and Victory made them such great reading! However, my favourite character has to be Tobias (Toby) Stirk! The unwritten bond of loyalty, trust and respect between him and Thomas Kydd is truly amazing! He has been there since the very beginning as a shipmate to Kydd and Renzi aboard Duke William. Without his ‘letters’ he cannot rise in rank but his skills are second to none. How many times has he saved the day for his ship mates? He has certainly helped save Thomas Kydd from himself and from the hangman’s noose. Toby is a true British Jack Tar!”

Would you like to be a candidate for Reader of the Month? Just get in touch with a few sentences about your background and why you enjoy the Kydd series!

Category: Reader of the Month