I’ve had the pleasure of knowing Hampshire-based amateur diver John Broomhead for over 20 years and have a huge respect for the work he (and a small group of fellow enthusiasts) undertook in connection with the excavation of the wreck of HMS Invincible, which they did without any government funding. Invincible was originally a 74-gun ship of the line of the French Navy launched in October 1744. Captured on 14 October 1747, she was taken into Royal Navy service as the third rate HMS Invincible. She was wrecked in 1758 after hitting a sandbank. A number of very important contributions to our knowledge of the Wooden World are directly attributable to John and the group. Recently, with a substantial government grant, the work has been taken over by Bournemouth University in their Poole-based facility. Currently, there are two exhibitions of the finds to date – a permanent archive at Chatham Historic Dockyard; the other, a one-year temporary exhibition at Portsmouth Naval Dockyard.

How did it all begin?

In April 1979, local fisherman and friend Arthur Mack, told me that whilst trawling with a fellow fisherman they had caught their nets on a solid sea bed obstruction. This was puzzling because they had trawled the same area for many years and had never snagged anything before. They had used the power of the engines to rip the nets free; when they were hauled back on board there was a large piece of timber tangled up in them. Now most fishermen would have sworn and cursed their ill luck before throwing the timber back over the side but Arthur had a feeling about it and kept it.

He showed it to me – two large pieces of oak in remarkably good condition held together by several wooden pegs known as treenails – and he believed the wood was from something as old as HMS Victory.Arthur asked me if I would have a look but I wondered how he could locate it. After all, it was at night when he had snagged it and without actually leaving a marker buoy how would he find it again? 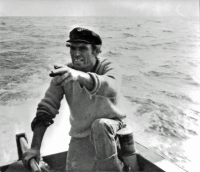 But Arthur felt he knew exactly where it was. He was so confident and enthusiastic that I got my diving gear and out we went. Unfortunately, we did not snag Arthur’s trawling gear on the wreck that day.

Arthur spent most of April going out in the daytime, trawling up and down in the same area. On 30 April he hit the underwater obstruction again! Unfortunately, he did not leave his trawl gear out there with a marker buoy for fear of someone stealing his nets. But he was able to take bearings and assured me he could definitely snag the obstruction on the next trip.
Although I had a nasty head cold and could not dive, friend and diver Jim Boyle said he would come out with us and have a look. In Arthur’s little open fishing boat, the three of us set off to find out just what it was on the seabed that kept calling Arthur back. Once again, we towed the trawling gear, which comprised of two, small otter boards with chains joining them together. This allowed us to cover about 20 feet width of sea bed on each pass and we did snag the obstruction.
Jim went down and was in the water for about 25 minutes before returning to the surface. He had found a line of very large wooden timbers but because the underwater visibility was so bad, he could see little else.

We intended to go back as soon as possible but we could not find the wreck again mainly due to misty conditions making it impossible to see the land transit marks taken previously. After some discussion, I said that when he snagged it again, he should leave his trawl gear tangled up on the wreck. He should put a buoy on the rope and I would make sure that either Jim or I would come straight out and free his nets. At the same time, we would take better land transit marks in order to locate the wreck more easily at any time in the future.

Not much happened during May but towards the end of the month, the weather forecast was favourable and we were entering a period of neap tides. Plans were made and a date set for 1st June when we would dive and seriously survey the wreck.
On that dive we set off along the wreckage feeling our way through thick kelp weed and over a mass of wreckage, stumbling across the remnants of several fishing nets snagged and abandoned on the very substantial timbers. These timbers were in the region of 15 inches square and sticking out of the sand at an angle of about 40 degrees. There was only about an inch of clearance between each timber making it appear like a row of gigantic teeth, stretching for what I estimated to be around 200 feet.
We came across the remains of a very large coil of rope lying on firm timber decking and lying at an angle of about 40 degrees. Later in the project this rope was removed and identified as tarred hemp cable-laid rope in extremely good condition.

What has been your role over the years?

I logged up many hours on the wreck spending as much time as I could out there with Arthur in his little 16 foot boat. She was a good little dive boat being low to the water but the time came when we needed something larger. One of Arthur’s fisherman friends was selling his 24 foot boat. The hull was good with a wide beam but not suitable as a diving platform. After leaving school I completed an apprenticeship in engineering and then spent two years managing an engineering workshop. I used my skills to revamp the old hull with new deck sealed in, and built a small cabin at the bows. With Arthur’s help I turned it into a into a diving platform with two compressors, one to operate the air lifts and a second to fill diving cylinders.
After obtaining the necessary permissions we managed the conservation of the excavation ourselves, setting up a conservation laboratory and storage facility in Portsmouth. All of this was costing much time and money and so we had to raise funds which I became more and more involved in.

In your view what have been the most interesting items recovered?

I suppose the most historically important and fascinating to work on, has to be the grand magazine. There were no examples to show how these magazines were made anywhere in the world. Nelson’s Victory at Portsmouth did not have one and the curator and archivist was at a loss to know how to build a replica on board for visitors to see until he was made aware of the one we found. As well, the racking in Victorys fore and aft hanging magazines were modelled on our discovery.

When we found the grand magazine on Invincible it was simply a massive pile of timbers. We took everything back to our laboratory and found that every joint in every piece of timber was numbered using roman numerals. In another piece of wood, was a corresponding number to show exactly where and how they fitted together.

Then there were the pigment barrels. We had no idea what they were when I first found one in June 1980. The contents were lumpy black pieces that we initially thought were the remains of gunpowder. Also in the barrels was sand which we thought was ingress from surrounding seabed. How wrong our guesses were! The black substance was the base constituent of Iron Gall ink. The sand is what they used in a ‘shaker’ – which was scattered over wet ink to ‘blot’ it. In essence the lovely tiny barrels were early day naval writing kits.
On 20th August 1979 I found the first of several sand glasses. It was concreted at one end and consisted of wooden frame, two glass bottles and of course sand inside. Research showed that this was a 30 minute glass and was used for timing the ships watch. 30 minutes = 1 bell of a four hour 8 bell watch.

Tell us about Phil Rumsey’s model of ‘Invincible’

In the mid 1980’s, we commissioned local model maker Phil Rumsey to create a scale model of Invincible from the original plans. We asked him to craft it using original material recovered from the wreck. To that end we gave him:
Oak from one of the original hull planks to make the hull and deck
Pine from some deck cladding to make the masts
Lignum vitae from one of the gun pulley blocks for the 74 guns
Animal bone from the galley area to make the figure head, the gingerbread around the stern and the stern lanterns

As for the rigging, Phil used his wife Hazel’s hair! The construction materials used make this model unique in ship models the world over. The model is just like Invincible herself when she was launched from Rochefort in 1744, the finest fighting ship afloat at that time. After her capture in 1747 the Admiralty heaped praise on her: ‘A Prodigious fine ship and vastly large’ Admiral Anson

National Museum of the Royal Navy Invincible temporary exhibition
Permanent exhibition of Invincible artefacts (closed for winter)
Old Man of the Sea by Brent Piniuta and John Broomhead
details the story of Arthur and John finding the wreck and excavating the site. The book also explains how Invincible artefacts today play a significant interpretative role aboard HMS Victory. All proceeds of the sale of the book will be split between RN Museum Portsmouth, Portsmouth City Museum and Chatham Historic dockyard for maintenance of the national Invincible archive.

8 Comments on “In Conversation with John Broomhead: Finding ‘Invincible’”