I’m a bit of a bah humbug creature when it comes to the commercialisation of Christmas – but there’s one thing that I fervently believe: a book is a present that, if well chosen for the recipient, will give hours of entertainment and enlightenment – and be a lasting reminder in itself of someone putting thought, not just money, into a Yuletide gift. So do consider adding one or more of these fine books – all with a maritime or military connection – to your gift-buying list. Hopefully, there’s something for everyone in this somewhat eclectic selection. 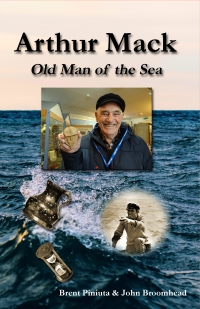 Arthur Mack Old Man of the Sea by by Brent Piniuta and John Broomhead
Lifelong Portsmouth resident Arthur Mack was born into a world of poverty and hardship at the time of the Great Depression. By the age of seven he was scavenging the mud of Portsmouth Harbour to help support his family. He became a fisherman and his affinity with the sea, uncanny luck and curiosity resulted in Arthur finding antiquities and artefacts from thousands of years of human activity in coastal Hampshire. He was responsible for the discovery and exploration of the wreck of HMS Invincible, a pivotal influence on 18th-century warship design and a technological bridge between Mary Rose and Victory.

The Greenhill Dictionary of Military Quotations by Peter Tsouras
The author brings 4,000 years of military history to life through the words of more than 800 soldiers, commanders, military theorists and commentators on war. Quotes by diverse personalities – Napoleon, Machiavelli, Ataturk, Rommel, Julius Caesar, Xenophon, T.E. Lawrence, Saladin and many more – these sit side by side to build a comprehensive picture of war across the ages. Easy reference is enabled by more than 480 categories, covering such topics as courage, danger, failure, leadership, tactics, guerrilla warfare and victory. A compilation to dip into time and time again, offering insights into the history of warfare and the lives and deeds of great warriors.

Napoleon in 100 Objects by Gareth Glover
For almost two decades, Napoleon Bonaparte was the most feared, and revered, man in Europe. At the height of his power, the land under his control stretched from the Baltic to the Mediterranean, and encompassed most of Western Europe. The many fascinating objects brought together in this lavishly illustrated book detail not only Napoleon’s meteoric rise to power, but also his art of war and the role of the Imperial Guard, which grew from a small personal bodyguard to the size of a small army.

Mastering Navigation at Sea by Paul Boissier
Boissier’s latest book is superbly illustrated, informative – and offers prime snippets of the author’s triumphs and disasters over a lifetime’s navigating. He has a unique perspective having navigated in many parts of the world from high up on the bridge of a warship, close to the water in a cruising yacht and at depth in a nuclear submarine. After his navy career, retiring as a senior admiral, he was Chief Executive of the Royal National Lifeboat Institution (RNLI), often dealing with the consequences of poor navigation. A writer who shares rather than dictates a lesson. Highly recommended.

Captain James Cook and the Search for Antarctica by James C Hamilton
Two hundred and fifty years ago Captain James Cook, during his extraordinary voyages of navigation and maritime exploration, searched for Antarctica – the Unknown Southern Continent. During parts of his three voyages in the southern Pacific and Southern Oceans, Cook narrowed the options for the location of Antarctica. Over three summers, he completed a circumnavigation of portions of the Southern Continent, encountering impenetrable barriers of ice, suggesting that in fact the continent existed, a frozen land not populated by a living soul. His Antarctic voyages are perhaps the least celebrated of all his remarkable travels: this book goes quite some way to remedying that.

Weather at Sea by Simon Rowell
Written by a round-the-world skipper and weather forecaster, this little book explains the basic physics principles that govern the weather from a practical, on the water, sailor’s point of view. As we can expect from Fernhurst, the author presents in readily understandable graphic form the global, regional and then local weather patterns to explain what is happening on the spot and how situations might change. Numerous illustrations complement the text. An ideal stocking filler for the cruising sailor. A professional weather-forecaster and sailor – you can’t get much better than that!