I’m focusing on the Royal Navy with this latest selection of BookPicks. As many of you know I had the honour of serving in both the Royal Navy and the Royal Australian Navy and my time at sea was one of the highlights of my life. I now write about the Royal Navy in the Great Age of Fighting Sail and vicariously live the adventure of those far-off days through my hero Thomas Kydd. From the sinking of Royal George to the fight against African pirates to an overview of the Navy in the first fifteen years of the nineteenth century to the great love of Admiral Nelson’s life – I hope this eclectic selection whets your appetite for more….

Catastrophe at Spithead by Hilary Rubinstein 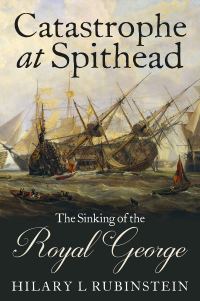 In one of the most sensational and perplexing incidents in naval history, Rear Admiral Richard Kempenfelt, a veteran naval officer, drowned along with more than 800 crew and many civilian visitors, male and female, on a calm summer’s morning and in a familiar anchorage. This riveting new work examines that tragedy – the sudden capsizing at Spithead on 29 August 1782 of the mighty flagship HMS Royal George. An extraordinary tale from the heyday of Britain’s naval power.

The Life and Letters of Emma Hamilton by Hugh Tours

Emma, Lady Hamilton, rose from humble beginnings to become a media celebrity, and her relationship with Nelson, and her renowned beauty, made her the most instantly-recognisable woman of her era. She married Sir William Hamilton, the British Envoy to Naples in 1791. And it was in Naples that she met Admiral Nelson – and the great love affair began. Tours, through her letters, provides fascinating insights into her life. This is history as moving as a tragic novel; most poignant of all being the return, after Trafalgar, of Emma’s last letter to Nelson, unopened.

The Royal Navy in the Napoleonic Age by Mark Jessop

As the nineteenth century began the newly-forged United Kingdom of Great Britain and Ireland commenced life at war with France and her allies and remained so until 1815. After 1812 she had to shoulder the extra burden of a war against the United States of America. With conflict on multiple fronts, hardships continued to be inflicted at home. Trade was precarious. People were weary of hostilities and the threat of invasion still ran high. But the Royal Navy was Britain’s sure shield and after the victory of Trafalgar in 1805 she dominated the seas. Her warships spread out all over the world were the nation’s first line of defence. The Royal Navy is Britain’s oldest continual military force and rightly deserves the respect that is accorded as The Senior Service.

Pirate Killers by Graham A. Thomas

From the Barbary Coast of North Africa pirates had preyed on shipping in the Mediterranean and the Atlantic for centuries and they terrorized the populations even of the coastal towns. To them, piracy was a way of life, and the great sea-powers of the day could do little about it. Then, 150 years ago, in one of the most remarkable and neglected anti-piracy operations in maritime history, the Royal Navy confronted them, defeated them and made the seas safe for trade. Based on original sources held at the National Archives, this a fascinating view into the way the Royal Navy responded to the menace of piracy in the nineteenth century.

1 Comments on “BookPick: The Senior Service”