In this trio of recommendations each book focuses on an aspect of defence at sea – and they range in time from the Victorian era through the Second World War to the Cold War. The authors all have a different writing style but bring to their chosen subject much illuminating insight. Regular readers of my blog will know I have much respect for the integrity of American naval historian Norman Friedman. Richard Woodman, a fellow naval fiction author, brings great scholarship and his own sea experiences to his work. And Eric Thompson is to be commended for his remarkable revelations about the secret world of nuclear submarines.

A companion volume to ‘British Battleship 1906-1946’ this book completes Friedman’s study of the Royal Navy’s capital ships. Beginning with the earliest installation of steam machinery in ships-of-the-line, Friedman traces the technological revolution that saw the introduction of iron hulls, armour plate, shell-firing guns and the eventual abandonment of sail as auxiliary propulsion. Friedman explains why as well as how and when these advances were made, and locates British ship design firmly within the larger context of international rivalries, domestic politics and economic constraints. A comprehensive gallery of photographs with in-depth captions is accompanied by specially commissioned plans and a colour section featuring the original Admiralty draughts. A must-read for all serious students of the Royal Navy.

On Her Majesty’s Nuclear Service by Eric Thompson 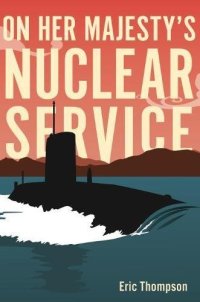 I’ve always had a fascination for submarines and at one stage in my naval career seriously considered joining the Submarine Service.
During the Cold War, nuclear submarines performed the greatest public service of all: prevention of a third world war. History shows that they succeeded; the Cold War ended peacefully, but for security reasons, only now can the compelling story behind it be told. Thompson provides a fascinating insight into what is was like to have your finger on the nuclear trigger button!

For the later four years of the Second World War, the Western Allies secured Russian defences against Germany by supplying vital food and arms. The plight of those in Murmansk and Archangel who benefited is well known, but few are aware in full detail of the courage, determination and sacrifice of the men of the Allied merchant ships, which withstood unremitting U-boat attacks and aerial bombardment in desperately cruel conditions to maintain the lifeline to Russia. In the storms, fog and numbing cold of the Arctic, the sinking of a 10,000 ton freighter was equal to a land battle in terms of destruction and continuing without pause to the last day of the war the losses sustained were the greatest pro-rata of any wartime service. The author deploys vivid description and first-hand anecdote to bring rarely achieved atmospherics to this work and re-released this year, it is a moving tribute to the vital role of the Merchant Navy in wartime.