Celebrating 20 years of Thomas Kydd: Readers Have Their Say 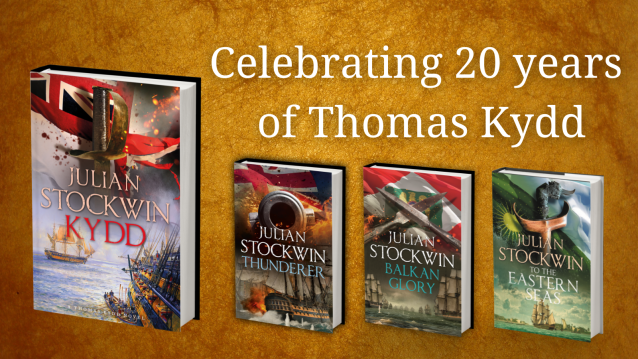 I sometimes have to pinch myself that the Kydd Series has been coming out for 20 years. I certainly remember my trepidation when putting together, at my agent’s request, a timeline for twelve books! But as I got into the Series, and found the historical record so rich and varied, my creative juices flowed and I now have greatly exceeded that original dozen – and have outlines for more still! Over the years reader feedback about my work has been very important to me; here’s a random selection of twenty recent comments.

Allan Smith: ‘I came across the Kydd series by lucky accident finding a paperback copy of Artemis in the local British Heart Foundation charity shop for the princely sum of 50 pence. All of the characters that Tom encounters, whether factual or fictional, are well developed with their own idiosyncrasies that either endears you to them or raises the hackles on the back of your neck; I don’t feel any writer can go further in drawing you into the story. I still find Seaflower and Mutiny two of the best books in the series, although sometimes I find myself rereading the passage in Tyger where all seems lost, the pumps struggling, the officers and men coming together as a team to beat the odds to return home putting Thomas Kydd into the ranks of Pellew of the Indefatigable and Keats of Superb. So from a old army WO2 all I can say to the salty sailor who pens these stories is Bravo Zulu, Julian.’

Chris Willis: ‘My position on James Craig is often as a Watch Leader (somewhat similar to a Petty Officer in the navy). This role requires a sound knowledge of how to sail the ship and knowing the ropes. One of the aspects of this role is calling the setting or trimming of sails as required by the officer of the watch. This requires ordering deck crew in your watch to perform the tasks involved. Reading the Kydd Series enhances traditional knowledge in this area as many of the terms etc. remain unchanged. This is a true indication of the accuracy of the books and research Julian has undertaken. I use traditional terms e.g. “roundly” or “handsomely” at times as I believe the crew should understand these terms as this is all part of sailing a traditional square rigger. I find the ongoing story of a humble wigmaker who really didn’t know his true calling until sometime after he was taken by the press that fateful night whilst enjoying a few ales with friends in the local inn, truly unique and in my opinion unrivalled in literature.’

Jeff Hillman: ‘I am 70/ex navy and enjoy Kent, Poe, Dumas, some of the best in literature. You are The Master of the genre. No series comes close. I have read all the books cover to cover three times now and am awaiting Thunderer with great anticipation. Please speed up your releases!’

James Bruce: ‘You have this amazing gift for explaining complex situations in a way that even lay people like myself can enjoy/understand.’

James Kitney: ‘As a ships master, and a past officer of a square rigger, I am also constantly impressed by the atmosphere of seamanship created in each book!’

Ian Noble: ‘Browsing in my local library many moons ago I spied a book on the end of an aisle. It was a hardback edition of Kydd, the first in the series. “That looks interesting” thought I. Who says you can’t judge a book by its cover. Read it…..no, I devoured it and now I’m hooked. No more waiting for the next one in the library, it’s my hard-earned specie invested in this particular pleasure. All the characters are so well formed but my particular favourite is faithful and dependable Stirk. I would always find a place for him in my crew. As for the impact the Kydd series has had on my life….it’s made me impatient as the time between each novel seems to drag like a poorly dropped anchor!’

[Richard Moorhouse: ‘I actually discovered Kydd in my local library, I have always loved maritime stories of the wars with Napoleon. I am also a fan of Alexander Kent with his series on Bolitho. I have all the Kydd books on my Kindle. I absolutely love them. Thank you Julian for many, many hours of entertainment, enthralment and often nail-biting tension! I love every second of reading your books!’

Darren Wraith: ‘I found Kydd in the library while looking for Hornblower substitutes. Within the next few weeks I had caught up with all the books available and have kept up with them ever since. The cherry on the top is Christian Rodska on Audible who brings the books to life.’

Derek Edwards: ‘I came across your books on Amazon and downloaded the audiobooks. I particularly enjoy the realistic stories and the historical fact. Nothing better than washing up and listening to a book!’

Steve Landsdown: ‘My favourite book has to be The Baltic Prize. I’m a street cleaner (I’ve done that job for 43 years) and when I started at 18 one of the older men took me under his wing. Sadly this man has died now but he told me about when he served in the merchant navy during WW2 and sailed with a couple of Russian convoys. He had told me a lot about Archangel. The same man was also two days in an open boat after his ship was sunk by a U-boat. As for favourite characters – well everyone loves Toby Stirk, I do like Bowden as well and obviously Kydd himself and and I couldn’t not like Renzi. The main thing that makes the Kydd books worth reading is the amount of research you put into them.’

Robert Fargher: ‘I’ve read Hornblower, Bolitho, Lewrie, Aubrey & Maturin as well as Kydd and I’ve enjoyed them all. But Kydd stands out to me as the best portrayal of a pressed man/foremast jack that I’ve ever come across and is a marvellously original tale. The initial book Kydd is so well-written and so detailed a description of life before the mast, of the growth of an involuntary landsman into a true sailor, so manifestly authentic and gripping, as I think has ever been published about Nelson’s Navy. The physical book is a great read but I want to particularly praise the audiobook. Listening to Kydd’s story as read by a proficient voice actor [Christian Rodska] really brings the story to life.’

Alan Rootes: I first came into contact with Kydd working as a Property Manager in Tenby in 2003. The Maintenance Manager of the largest block of apartments I managed had been given the first 3 Titles: Kydd, Artemis and Seaflower by one of the apartment owners and after reading them himself, knowing I was ex-RN kindly gave them to me to read and keep if I enjoyed them. Keep I did and still have them to this day. Once I started to read Kydd I was unable to put it down, what an incredible story, quickly followed by my reading of Artemis and Seaflower. I was hooked and purchased all your subsequent books. I am in awe of the fantastic detail you achieve in your books and you are so lucky to have Kathy by your side to support you. You are a brilliant team and I’m really looking forward to receiving my copy of Thunderer in October.’

Christopher Prillwitz: ‘I discovered the Kydd series at the Aurora CO USA library. They are very well written and researched. The books have made me want to see some of the places in the novels other than London and Portsmouth.’ 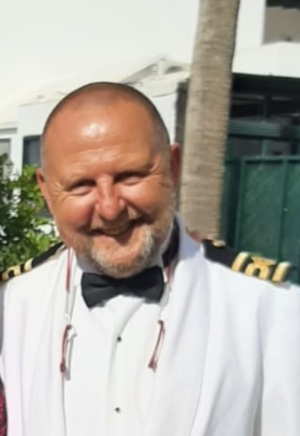 Alan Eggleston: ‘Having just finished the last Hornblower book, I was desperately looking for a new author of age-of-sail stories. This was soon after I started work as a bookseller at an independent bookstore, and I found myself shelving a new title the store had just received with a wonderfully adept cover, and I sneaked a quick read inside. It was just what I was looking for. I found more of Julian’s books on the shelf and bought the first book of the series, Kydd, along with the second. And I have read every one of the following titles since. The realism, the research behind them, the amazing characters – especially the recurring characters, and the witness to history is what brings me back to the novels. I also love the vivid descriptions and heart-pounding action. My favorite character is Toby Stirk. If you ever kill him off I’m afraid I’m going to dissolve into a pile of mush. What a great hero of the Brit everyman Stirk is, with a heart of gold. I know I’ll never miss another good read as long as you’re still writing.’

Greg Dermody: ‘A dedicated long time fan, I found Kydd and Artemis on clearance at bookstore chain in Canada. After I read those first two I found Seaflower and was hooked. I waited patiently for the next editions, often as Christmas gifts. I think the main thing that keeps me coming back is the profound and sometimes surprising character development that is intertwined with the standalone yarns and adventures, accurate to the period and geography. Basically I am transported to a different time and place with people I have come to know and want to know more. It’s hard to pick a favourite book, like having a favourite child. One of the ones that really sticks with me is Treachery. The journey is full of twists and turns, heartbreaks and successes – some of those small and some grand! Thank you Julian for taking the risk to write, and then to expand your plot line, your character development and exceptional location development. A passion become a job, become a career, become a lifestyle.’

Rev. David Smith : ‘I found the Kydd series by computer search. I have been a reader of historical fiction for some time. I like the realism of the stories. I can picture myself in the action, and country where the story takes me. I think that Persephone would be my favorite. There are some similarities with my wife and I. As a pastor, I am always caught up in the times Capt. Kydd has the canopy set up for Sunday service. Every obstacle that comes across Kydd’s path, the characters press on to find the solution. In life there comes obstacles, and like the Kydd series, I press on to turn the obstacles into opportunities.’

Paul Kersey, Master, RV CEFAS Endeavour: ‘I just wanted to reach out and congratulate you on the Kydd series. I’ve been reading for a year now and just finished The Baltic Prize. As a Master mariner and square rig master I have to say your technical descriptions and sailing manoeuvres are faultless. So I doff my hat to you, sir.’

Nick Holt: ‘I always look forward to the next one, read it in a couple of weeks then it’s a long wait for the next. Sometimes I wish I hadn’t discovered Kydd until you had written the last book, then I could have locked myself away and read the whole series from start to finish. Wishing my life away again……Roll on October.’

Anthony D. Jerome: ‘I read them all within a year. Can’t wait for the next book!’

← BookPick : A Secret World
BookPick : Disaster and Survival at Sea →

19 Comments on “Celebrating 20 years of Thomas Kydd: Readers Have Their Say”