I sometimes have to pinch myself that the Kydd Series has been coming out now for twenty years. I certainly remember my trepidation when putting together, at my agent’s request, a timeline for twelve books! But as I got into the Series, and found the historical record so rich and varied, my creative juices flowed and I now have greatly exceeded that original dozen – and have outlines for more still!

Balkan Glory is out in paperback in the US this month, following the earlier launch in the UK. 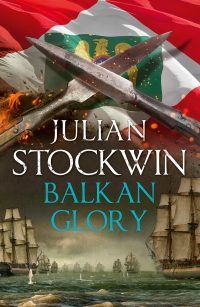 1811. The Adriatic, the ‘French Lake’, is now the most valuable territory Napoleon Bonaparte possesses. Captain Sir Thomas Kydd finds his glorious return to England cut short when the Admiralty summons him to lead a squadron of frigates into these waters to cause havoc and distress to the enemy. Kydd is dubbed ‘The Sea Devil’ by Bonaparte who personally appoints one of his favourites, Dubourdieu, along with a fleet that greatly outweighs the British, to rid him of this menace. At the same time, Nicholas Renzi is sent to Austria on a secret mission to sound out the devious arch-statesman, Count Metternich. His meeting reveals a deadly plan by Bonaparte that threatens the whole balance of power in Europe. The only thing that can stop it is a decisive move at sea and for this he must somehow cross the Alps to the Adriatic to contact Kydd directly.
A climactic sea battle where the stakes could not be higher is inevitable. Kydd faces Dubourdieu with impossible odds stacked against him. Can he shatter Bonaparte’s dreams of breaking out of Europe and marching to the gates of India and Asia?

Available as physical book, ebook and audiobook, it has earned rave reviews from press and readers alike :

‘Balkan Glory is thrilling stuff indeed’ – Warships
‘Storytelling is of a superb quality, all characters, whether they are real historical or fantastic fictional, come vividly to life within this tale of sea, battles, land, intrigue, war, and peace.’ – Amazon reader
‘Amazing book. Amazing author.’ – Amazon reader

Thunderer is the latest title, out now in the UK in hardback; worldwide in ebook and audiobook.
The hardback will be released in the US January 18. 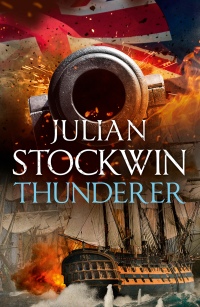 1812. Arriving back in England after his successes in the Adriatic, Captain Sir Thomas Kydd is bestowed with honours. In London he’s greeted by the Prince Regent who, despite Kydd’s protestations that he’s happy with his present command, insists he be given a bigger ship – HMS Thunderer, a 74-gun ship of the line. But she’s old, and being part of a standing fleet, Kydd’s chances of further fame and distinction are slim indeed.
Winning over his new command is fraught with challenges. A hostile crew, abysmal levels of gunnery and sail-handling capabilities are intolerable to a fighting captain like Kydd. With the ship short of men and no incentives to attract more, can he ever bring Thunderer to a proper state of fighting preparedness?
Kydd is sent to reinforce the Baltic squadron as Bonaparte’s vast army invades Russia. News reaches him of French victory at the Battle of Borodino. The road to Moscow is now open. To avert total French victory, Kydd has a vital role to play.

‘Quarterdeck’ magazine had this to say:

‘As he has in twenty-three previous Kydd titles, Stockwin creates a knotty narrative, writing with authority about Britain’s Georgian navy and the physical world at sea with intrigue, captivating characters, and deft storytelling. Thunderer is a suspenseful journey back to the early nineteenth century, where the author’s imagination comfortably resides.’

At the moment I’m working on the manuscript of 2022’s Kydd adventure, working title ‘Yankee Mission’. It will be published in the UK on October 6 in hardback, and ebook and audio download worldwide. The US launch will follow in early 2023.

Do you have a favourite Kydd title? I always love to hear from readers and you could win a mystery prize! I’ll draw one lucky winner out of the hat at the end of November. Emails to julian@julianstockwin.com. Please include your full postal address.