Readers of the Kydd series will recall several mentions of machines that enable humans to swim with the fishes. In Invasion Kydd meets the gifted but enigmatic inventor Robert Fulton and his prototype submarine. And in Inferno Kydd himself braves the world beneath the waves in a diving contraption. I have warm memories of learning to scuba dive in the Philippines and thrown in free was an amazing close encounter with a twenty-ton whale shark! This month’s BookPicks focus on two different aspects of the undersea world, with a magnificent new book from Iain Ballantyne on the military deployment of submarines and a delightful little tome on the quest for treasure in shipwrecks. There’s also a special contest at the end of this blog for two lucky readers to win a copy of Ballantyne’s book.

The Deadly Trade by Iain Ballantyne

At over 700 pages, this thrilling narrative certainly justifies its subtitle: The Complete History of Submarine Warfare from Archimedes to the Present. Considered ineffectual and originally derided and loathed in equal measure – their crews viewed as no better than pirates – submarines have over the centuries evolved into the most powerful and terrifying vessels at sea, some carrying enough nuclear weapons to destroy mankind.

Using key episodes of submarine warfare – including the first sinking of a ship by a submersible during the American Civil War, the legendary struggles of WWI and WWII and the deadly shadow games of the Cold War Ballantyne’s history addresses not just how these vessels evolved but highlights the human cost of those who risked their lives under the sea, often with fatal consequences. The Deadly Trade also deals with the resurgence of submarines as political and military tools in recent conflicts.

Enhanced with well-chosen photographs and maps, along with comprehensive appendices and notes, this epic story should appeal not just to those who venture into Neptune’s Realm but students of history and politics – and any with a fascination for the efforts of dreamers and inventors over the ages.

Diving for Treasure by Vic Verlinden and Stefan Panis 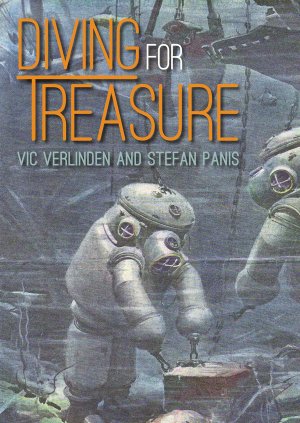 Having enjoyed reading Dive Scapa Flow I looked forward to this new diving book from Whittles Publishing. The authors, both skilled divers and underwater photographers, discuss seventeen undersea wrecks – presenting details and a brief history of each vessel, including the manner of their demise and the cargo they were carrying at the time.

Verlinden and Panis personally visited and photographed the wrecks and as many of the these lie at great depths diving on them posed considerable personal and technical challenges. It is sobering to note that salvage operations often extend over a long time – it took seven years to recover the bulk of the 43 tons (!) of gold aboard SS Laurentic.

This book will appeal to all those who venture into Neptune’s underwater realm, whether active or armchair, and to anyone with an interest in maritime/military history.

Win a copy of ‘The Deadly Trade’
For a chance to win a copy email julian@julianstockwin.com with the name of the maritime magazine which Iain Ballantyne edits.
Please include your full postal address.
Two winners will be drawn at random from all correct entries.
Deadline: Midnight GMT Thursday 22 March

← BookPick: Four for February
Stockwin Titles: What’s Out When →