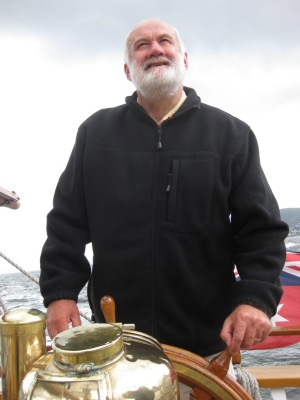 At the helm of “Lady Nelson”

I was born in the English town of Basingstoke in 1944, but have lived in many parts of the world including Australia and the Far East ‑ and now home is ‘Corinthia’, an eighteenth‑century house (which we share with Chi and Ling, two very charming and naughty Siamese cats) in a quiet part of Devon.

I wanted to go to sea ever since I can remember. My mother says that as a toddler I went up to sailors on the street, and on one occasion dragged home a dead sea bird because it smelled of the sea. My uncle Tom Clay, a seaman in square-rigged ships who sailed around Cape Horn in the Cutty Sark, took me over his ship and also around the National Maritime Museum and was a great influence on me. (No one else in my family had any connection with the sea; my father served in the army during the war.) As a young boy I read everything about the sea, and was especially terrified by a description of a great storm, but longed to go to sea to experience a real one!

I won a scholarship to a fine English grammar school, but my mind was captivated by seeing low grey shapes slip away over the horizon, outward bound to who knew where. I passed this sight every day on my way to school. My scholastic performance suffered.

In the hope of having the nonsense knocked out of me my father sent me at the tender age of fourteen to the Indefatigable, a tough sea-training school. This only strengthened my resolve for a life at sea, and I joined the Royal Navy at 15. My family emigrated and I transferred to the Royal Australian Navy. I served there eight years, saw my great storm, and was eventually rated petty officer. In my naval career I saw service around the world, including the Far East and South Sea islands. In Vietnam I served in a carrier task force and was on board Melbourne at the time of the disastrous peace time collision with Voyager. 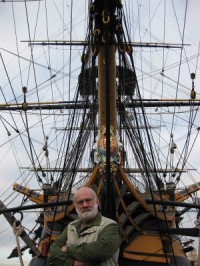 At the bow of HMS Victory

Leaving the Navy was a wrench but I wanted to take up the education I had missed, a considerable challenge having no qualifications from school! Attending the University of Tasmania I graduated in Far Eastern studies and psychology (after what I had seen in the fo’c’sle of a warship, fascinating). After teaching for two years I practised as a psychologist. Then I met Kathy and we decided to seek adventure in Hong Kong. I initially did post-graduate work in cross-cultural psychology and in the process was seduced by computers. Disillusioned with academic life I became involved in the manufacture and design of computers and later software development. Meanwhile, Kathy’s career was developing as a journalist and we enjoyed the social life of a foreign correspondent. At this stage I renewed direct involvement with the Navy, being commissioned into the Royal Navy Reserve. I was honoured to be awarded an MBE and retired as Lt Commander.

In 1990 I returned to the UK to be involved with a big project concerned with the strategic deployment of merchant shipping. This was an extremely high pressure environment, and in 1996 Kathy and I took stock – she told me to get a life! Her suggestion: that I write. And about the sea…

She saw my potential as a writer (where I did not) and persuaded me to give it a go. I took a half‑time job lecturing in order to devote time to absorbing the craft of writing.

I’m ‘Old Navy’ with a deep respect and admiration for the service, so it had to be the Navy I’d write about. I chose Nelson’s time, the great climax of the age of sail and a magnificent canvas for sea tales. This was an era when the sea was respected and wooed by men who didn’t have steam engines and brute force. I also wanted to bring the sea itself into a more prominent role.

But to achieve that more prominent role for the sea, it seemed logical to take the perspective of the men who actually did the job out there on the yardarm, serving the great cannon or crowding aboard an enemy deck, rather than of those shouting orders from behind. So the lower deck it was – and then I came across some surprising statistics. Unlike the army, where commissions were bought, all naval officers had to qualify professionally, and scattered among these were no more than a couple of hundred common seamen who made the awesome journey from the fo’c’sle to the quarterdeck, thereby turning themselves into gentlemen. Some became captains of their own ships; remarkably, some victims of the press-gang even became admirals. How could it be so? Just what kind of men were they?

I began to write my story… 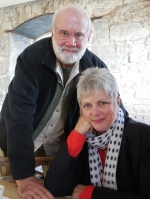 I soon realised there were things from my time in the Navy that I wanted to bring to my writing; small things but evocative to this day ‑ a shimmering moonpath glittering on the water, the sound of voices from invisible night watchkeepers, the rich stink of land after months at sea, the comfort of a still hammock when the ship rolls about… There were darker moments, too. Savage storms at sea when you feel the presence of nature like a wild beast out of the cage…

Kathy’s skills as an editor were seminal in the process of my developing as a writer and finding a voice and we now work full time as a close creative team.

As well as the latest book in the ongoing Kydd series, To The Eastern Seas, I’ve brought out another two historical action-adventure novels, The Silk Tree and The Powder of Death.