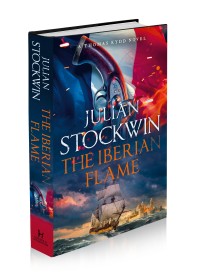 This year there will be two Kydd titles released; the first is The Iberian Flame, out in June. The second, A Sea of Gold, will be launched in November. As usual, I will be offering a Collectors Set for each. These signed, numbered and embossed First Edition Sets are strictly limited in number to 500 only. I’m happy to write a short dedication on request. The Subscription List for The Iberian Flame is filling rapidly so if you’re interested don’t delay to avoid disappointment. Payment is via the links here

Here’s what two of my editors have said of the manuscript of The Iberian Flame:

‘Congratulations on another masterful outing and one that will be a delight to both your fans and fans of historical fiction alike.’

‘Many congratulations on another gripping instalment in the career and life of Thomas Kydd. This is, as ever, a magnificent yarn, on land and at sea. Great characters – and marvellously wrought backdrops (you bring them so expertly to life), in seascapes, landscapes and cities or towns. A compelling, absorbing story.’

And here’s a taster of the story:

“1808. With the Peninsula in turmoil, Napoleon Bonaparte signs a treaty to dismember Portugal and put his brother, Joseph, on the throne of Spain. Meanwhile, Nicholas Renzi, the Lord Farndon, undertakes a deadly mission to stir up partisan unrest to disrupt this Napoleonic alliance with Spain.

Thrust into the crucible of the uprising, Captain Sir Thomas Kydd is dismayed to come up against an old foe from his past – now his superior and commander – who is determined to break him. Kydd will soon face the greatest decision of his professional career.

Bonaparte, incensed by the reverses suffered to his honour, gathers together a crushing force and marches at speed into Spain. After several bloody encounters the greatly outnumbered British expedition have no option other than make a fighting retreat to the coast. Only the Navy can save them.

But the flame of insurrection has been lit – and the Peninsular War has begun.”

The Iberian Flame will be published in hardback, ebook and audio download on June 14 in the UK by Hodder & Stoughton. It will also be available in the States in ebook and audiodownload at that time, with the hardback coming out in August.