Over the coming months I’ll be celebrating the earlier titles in the Kydd Series, it’s Treachery for this blog. I’d love to hear your thoughts on the book, either as a first-time reader or if you’re a re-reader and have read it more than once! It’s very gratifying for an author to be told that his work has inspired people to go back an read it again. And some of you have told me you have done this more than twice! Either reply to this blog or email me. Every respondent goes into the hat for a chance to win a mystery prize!

‘Thomas Kydd has dragged himself up in the Navy from press-ganged seaman to captain of his own ship. Now he faces disgrace. After losing favour with his superiors, and suffering terrible personal tragedy, Kydd and his ship are sent to guard the Channel Islands from Napoleon’s forces. When he is brutally betrayed off the Normandy Coast and removed from command, only his old friend Renzi is willing to stick by him.

Kydd is determined to clear his name, but soon finds himself fighting yet another battle he seems to have no chance of winning. Can he defeat his enemies on both sides, and win back the glory taken from him?

Julian Stockwin has done it again he has cast an enchantment over the booklover to heave them into the exciting world of Thomas Kydd, a working class lad who has advanced from being a pressed man of the lower deck to the quarterdeck over a succession of seafaring yarns.

A superbly written book, progressing the story of Thomas Kydd and his best friend Nicholas Renzi.

Through more twists and turns than a first-rate murder mystery this book is in basic terms outstanding and once started it is easier said than done to put down, Julian Stockwin weaves a remarkable account set early on in 18th Century England as well as sticking to his guns with the standard of story telling he has made me appreciate.

Julian Stockwin is a instinctive teller of tales and, with his Thomas Kydd and the captivating intrigues a man with a stunning imagination and just as unfalteringly his research is truthful and matchless, I can’t recommend Treachery highly enough.’ – The Book Shelf 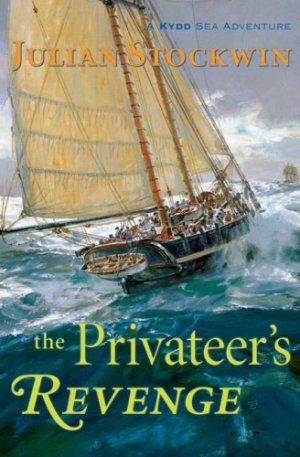 The US edition of the book, The Privateer’s Revenge

Sometimes in publishing the same book may appear in different territories under different titles. The reasons for this are varied – a publisher may feel an alternate title works best for his audience or that the original title is too close to another book familiar to readers. Treachery was published in the UK and Commonwealth countries under that name but in the US as The Privateer’s Revenge.

One question I’m sometimes asked is what is the difference between a pirate and a privateer. It’s all down to a piece of paper called a Letter of Marque. This was a government license authorizing a named captain and ship (really as a privateer business) to attack and capture enemy vessels by way of reprisal and bring them before admiralty courts for condemnation and sale. A kind of privatised man-o’war. Cruising for prizes with a letter of marque was considered an honorable calling combining patriotism and profit, in contrast to unlicensed piracy, which was universally reviled as a crime against all humanity. 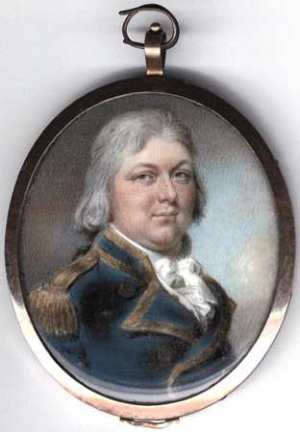 One of the really fascinating real-life characters I researched in the course of writing the book is the spy-master Philippe d’Auvergne, a British naval officer and the adopted son of Godefroy de La Tour d’Auvergne the sovereign Duke of Bouillon. He chose a career in the Royal Navy (beginning as midshipman in 1770) that spanned a period of history where Great Britain was at the centre of wars and empire building and took him from Boston and the War of Independence to espionage with French Royalists; prisoner of war to shipwrecked; all this while hoping to become a Walloon ruler or, at least, heir to a princely fortune. Mont Orgueil castle in Jersey was the base for his clandestine activities.

D’Auvergne was born in Jersey. His mother Elizabeth, the daughter of Philip Le Geyt, died giving birth to him. His father, Charles, was an ex-British Army officer, aide-de-camp to various governors, and an advisor to British Cabinet committees. D’Auvergne was educated in Jersey, then England and France. He was fluent in French and English and had a mathematical mind.

In the event, after peerless war service and when Waterloo disposed of Napoleon, the allies met at the great Congress of Vienna where he was to be sadly betrayed. His princely inheritance to which he was able to finally return was taken and partialled out among the victors and he was left with nothing.

Previous blog on BOOK : Treachery: prey and prizes!
Treachery / The Privateer’s Revenge has been published in the UK/US in English, in translated editions and in ebook, large print and audiobook.
Buy on Amazon or The Book Depository (free postage worldwide!) Also available at most bookstores.
Detailed list

Copyright notices
D’Auvergne image: By Inconnu (début XIXème siècle) [Public domain], via Wikimedia Commons
Every effort is made to honour copyright but if we have inadvertently published an image with missing or incorrect attribution, on being informed of this, we undertake to delete the image or add a correct credit notice