Italy Through the Eyes of a Novelist

‘One doesn’t come to Italy for niceness, one comes for life.’ I think E M Forster aptly sums up what Italy means for the novelist. It is so rich, so alive, that it’s impossible for an author’s creative juices not to be stimulated by a visit. And of course Italy has the legacy of so many of the world’s great artists and sculptors who were inspired there. One of the most memorable moments I’ve ever experienced was coming into Venice for the first time, one evening in late January. As it was off‑season Kathy and I had the water taxi to ourselves, mist hung low over the lagoon, a whiff of the sea on the air and a dusky violet shimmer to the dawning light. We passed shrouded islands then the majesty of Venice opened up. Neither of us spoke for a long time as we took it in…

We were there for location research and in Mutiny I describe approaching Venice through my hero’s eyes: ‘The spreading morning vision took Kydd’s breath away; an island set alone in a glassy calm some five miles off, fairy‑tale in the roseate pale of morning, alluring in its medieval mystery.’

Two of my books, Mutiny and Tenacious, see Kydd and Renzi in Italy. Initially I’d planned to feature the country in just one tale, but I was so inspired that I had to use it in another book. And possibly there will be more in the future…

Italy was the primary destination of the Grand Tour. If you were of noble birth in the Georgian age it was the done thing to complete your education with a period of European travel, lasting from several months to sometimes years. The British were particularly attracted to classical Italy and came to see, first‑hand, both monuments of civilisation such as the Coliseum, and wonders of nature like Mt Vesuvius. 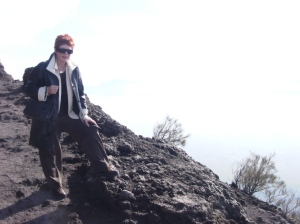 Renzi, who’s a somewhat enigmatic character in the earlier Kydd books, comes from a very high social background but when I first introduce him he’s a common sailor in a man of war. As a matter of principle he’s sentenced himself to self‑exile to expiate what he considers the sins of his family when a young labourer on his estate committed suicide as a result of an Enclosure Act’s effects.

Renzi had been on the Grand Tour. He’d also stayed with a very important diplomat in Naples, the ambassador, Sir William Hamilton, husband of Emma Hamilton, who had a passionate love affair with Lord Nelson. One of Hamilton’s interests was vulcanology, and he invites Kydd and Renzi to take in the spectacle of Mt Vesuvius.

We left the UK by air for Venice, the city that stole our hearts. All too soon we had to move on, following the spine of Italy to the south by train. Next stop: Florence, then we headed to Rome. Our final destination was Naples before returning to the UK. Going by train is a good way to see the countryside and also in my case I don’t like airports and tiny seats in planes! The trains in Italy are very comfortable and we’ll certainly travel this way again.

Before we set out on location research there’s a great deal of planning, contacting experts in various fields, finding where the museums and archives are etc and who’s in charge and so on. Our primary goal is to get a good picture of the place in the eighteenth century and for this we have to be quite disciplined indeed, not to get sidetracked with material, however interesting, that’s not concerned with the plot of the book.

I’m a visile – when I write I need to be able to see things in my mind’s eye. Also there are certain intangibles about a place – the smells, the colours, the sounds, you can only get from actually being there.

I always carry a tiny dictaphone and digital camera on me. These are used to record all sorts of things during the day, and then at night I have to enter the notes and pics into the laptop before I’m allowed that first drink of the evening. We also always end up buying all sorts of priceless local reference books, maps, charts and so on. Often these are so heavy we have to send them back separately! They are a wonderful adjunct to the photos I take and I use them as I write to refresh my memory of actual details.

Greatest shipyard in the world 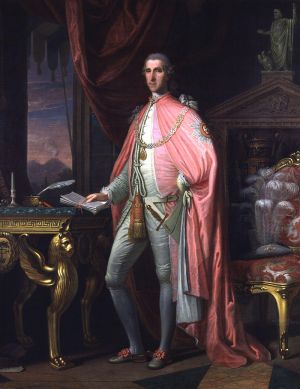 For me it’s necessary to mentally transport myself back into the eighteenth century as I write my books. The difficulty of doing this varies depending on how much the 21st century has encroached. In some places there are great links to the past, old buildings, customs etc. but in others it’s quite difficult to take away modern trappings. Italy wasn’t too difficult for me. So much of its glorious past is still there.

Venice stands virtually as it did two centuries ago. In fact in Venice you are looking at 1100 uninterrupted years of empire. It was also once the greatest shipyard in the world with 16,000 workers. Its feared rowed galleys dominated the Eastern Mediterranean. But as interesting as all this history is to me we had to focus our work.

The first stop was the Maritime Museum where I wanted to see a genuine gondola from the eighteenth century. Unlike most of those today, it was painted black in deference to the sumptuary laws. Today there are around 500 gondolas, but in the period I write about there were 14,000. With its black curtains I could immediately see a possibility for secret meetings, assignations – mystery and romance – or both…

I also wanted to look at the details of particularly Mediterranean vessels, like the strangely named xebec.

We didn’t miss St Marks Square and Florians. The best chocolate in the world!

In Mutiny Kydd and Renzi find themselves ashore in Venice on a mission to rescue an important diplomat. The scene is set at the point where Napoleon was about to fall upon the Venice of Casanova and end its 1000 years under a Doge. While they are waiting for news of the diplomat they venture into the streets. They are separated and Renzi is tormented by memories of his former time in Venice.

Naples, the third city of the world according to Goethe. And no doubt you’ve heard the the phrase ‘See Naples and die…’

Nelson has very strong links with Naples. It was there he sailed to after his incredible victory at the Battle of the Nile.

One of the things that surprised us about Italy is how much variation there is in just a short distance. Naples and southern Italy is so different to the north. Naples has a special and very distinctive vitality. It seemed to me totally appropriate that Nelson’s great victory at the Nile was recognised so exuberantly in Naples.

It’s not known when Emma Hamilton and Nelson first became actual lovers, but it is clear that Naples was a turning point for them.

I can’t wait to find an excuse to get Kydd and Renzi to return to Italy!

Copyright notices
Hamilton image: David Allan [Public domain], via Wikimedia Commons
Every effort is made to honour copyright but if we have inadvertently published an image with missing or incorrect attribution, on being informed of this, we undertake to delete the image or add a correct credit notice

← BookPick: A History of the Royal Navy: Empire and Imperialism
KyddFest-1 : KYDD →

8 Comments on “Italy Through the Eyes of a Novelist”