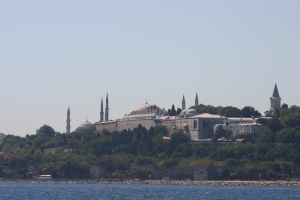 Another in a series of blogs spotlighting some of the marvels I’ve come across as I’ve travelled the world researching my books. The Topkapi Palace in Istanbul, Turkey, is situated on Seraglio Point, a promontory overlooking the Golden Horn and the Sea of Marmara. It’s a truly memorable complex with the haunting mystery of sultans and harems still about it, and I made it the centre for Renzi’s exotic adventure in Pasha. Istanbul is a magical city with many splendid sights but one of my most vivid memories of my visit there is standing on a wing of the sultan’s private quarters in the Topkapi looking out at the vista. To the left is Europe, to the right Asia. Directly in front is the Bosporus leading to Russia. Turn around and there’s the Sea of Marmara leading to Mediterranean and western world. And at your feet the Golden Horn..

1. The Topkapi Palace was the primary residence of the Ottoman sultans for approximately 400 years of their 624-year reign.
2. Topkapi is the largest and oldest palace in the world to survive to modern times.
3. The palace was the heart, brain and centre of the Ottoman Empire. As well as the residence of the sultan, it was the centre of administrative affairs and the highest educational institution of the empire. 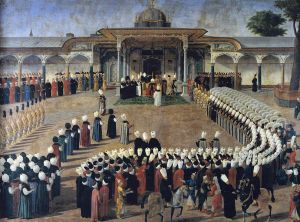 4. The number of residents of the palace was generally around 5,000 but this could double during festivals.
5. The palace is located directly behind Hagia Sophia, and was built on the same spot where the acropolis of the ancient Greek city of Byzantium stood.
6. The Imperial Mint, located in the Topkapi Palace, produced Ottoman coins and later, coins of the Turkish Republic, right up until 1967.
7. As many as 300 concubines lived in the Harem of the palace.
8. In the early days white eunuchs were guardians of the harem, but black eunuchs sent as gifts by the Ottoman governor of Egypt later took control. As many as 200 eunuchs lived in the harem.
9. The 1000-strong palace kitchen staff prepared 6,000 meals a day.
10. When the sultans moved to the Dolmabahce Palace in 1853 Topkapi lost its importance as the official royal residence. It was transformed into a museum in 1924 upon the order of Ataturk

The Museum is open between 0900 and 1700 every day except Tuesday. It is also closed on some religious festivals.

For a chance to win one of five paperbacks of Pasha email julian@julianstockwin.com with “Pasha paperback” in the subject line. Please include your full postal address. Deadline: April 30.

Copyright notices
Topkapi Palace: © José Luiz Bernardes Ribeiro /, via Wikimedia Commons
Audience with Selim III: By Konstantin_Kapidagli_001.jpg: Konstantin Kapıdağlı derivative work: Isl@m (Konstantin_Kapidagli_001.jpg) [Public domain or Public domain], via Wikimedia Commons
Every effort is made to honour copyright but if we have inadvertently published an image with missing or incorrect attribution, on being informed of this, we undertake to delete the image or add a correct credit notice

← Juggling all the balls…
A Cat Called Kydd →