I recently heard from Teresa Reis, one of my readers, that she had named her cat in honour of my books. The feline in question looks a real character and as a life-long cat lover I was rather chuffed. Teresa is a professional photographer who lives in Portugal. Her handsome cat answers to ‘Kydd’ – just one small thing to mention; since being awarded this august name, he has been discovered to be a she. Teresa says, however, that she’s sticking to Kydd! But this is not the only tribute my readers have paid to my work in a number of wonderful and unusual ways… 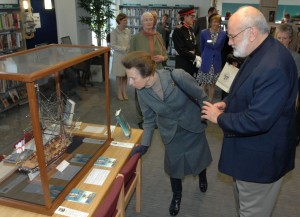 I was gob-smacked when reader John Thompson told me he wanted to build a model of Teazer, Kydd’s first command – and present it to me! The superb model even gained the royal seal of approval, here being viewed by HRH The Princess Royal 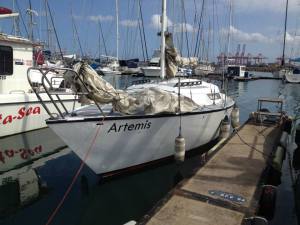 Marius Moolman christened his beautiful yacht Artemis after the second book in the Kydd series. Perhaps his vessel does not roam the seas after prey and prizes, but she has lovely lines, just like her namesake!

Imagine my surprise when I was contacted by a salty mariner claiming to be a petty officer from HMS Teazer! No, it wasn’t the Teazer that Kydd knew and loved but a Royal Navy destroyer of yore that CPO Vince Hart served in. Sadly, she is no more but Vince presented me with his treasured Teazer cap tally

And, perhaps most touching of all – I learned that a reader in Japan left instructions in his will that he be buried with his treasured copies of Kydd books

Copyright notices
Kydd: Teresa Reis Photography; Artemis: Marius Moolman
Every effort is made to honour copyright but if we have inadvertently published an image with missing or incorrect attribution, on being informed of this, we undertake to delete the image or add a correct credit notice

2 Comments on “A Cat Called Kydd”