Kathy always tells me men are hard to busy presents for – so here are two suggestions for Christmas gifts for males with an interest in the maritime world: Early Ships and Seafaring and The Royal Navy and the War at Sea 1914-1919. The former covers the earliest days of water transport up to the fifteenth century; the latter, the First World War. 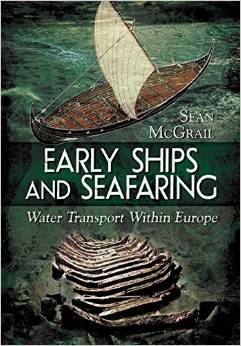 The study of water transport is a relatively new branch of archaeology and Sean McGrail, formerly chief archaeologist at the National Maritime Museum in Greenwich, is well qualified to expound on what is now known of early European boat-building and use in the Mediterranean and Atlantic Europe. Having visited the Viking museum at Roskilde earlier this year, I was particularly interested in the sections in this book on the Nordic boats with their advanced keel and clencher build, which is not so very far from the actual techniques I used in my graduation test job on a whaler in the course of becoming a naval shipwright. This interesting 2014 volume is bang up to date with recent exciting discoveries of post-glacial European craft, by implication pushing back early voyaging thousands of years, and which must necessarily now inform current studies of cultural diffusion across the continent. The book opens with a substantial section on concepts and techniques that describe the advantages and drawbacks of differing builds which provides accessibility to those with little or no knowledge of the subject. There is a useful glossary and suggestions for further reading. Highly recommended for those with a curiosity and passion for maritime origins.

Skip quite a few centuries on for the next book, which highlights just how much naval activity there was across the globe during the First World War. This book reproduces the despatches of the admirals and captains who led the Royal Navy’s operations during the War as they grappled with the unforeseen consequences of the dizzying revolution in technologies. They present a unique and atmospheric record of how commanding officers saw things at a time when there were no rules or traditions in deploying their new and awesome weapons. It’s worth highlighting that the fighting did not end for the Navy in 1918. Britain supported the White Russians in the Russian Civil War and the Navy was heavily involved in the Baltic and the White Sea until almost the end of 1919. The book contains a fascinating collection of black and white action photographs from the time that for this reviewer are seen for the first time.