Kathy and I have just returned from a location research trip to France. Whenever possible I like to travel by sea and we sailed from Plymouth to St Malo in the good ship Bretagne, the Brittany Ferries flagship. Sadly, the sea was pretty calm throughout the crossing and I didn’t get a repeat of the Force 9 Gale on our last trip but Kathy has her views…

Gratifyingly I came upon one of my French translated editions in a bookstore there in St Malo and had a great chat in broken French with the owner which led to an invitation to address an international maritime convention later in the year. 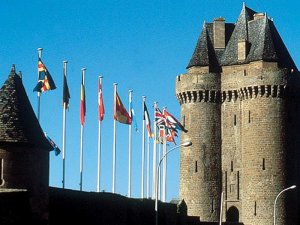 As usual, much of our work was done in local museums, academic institutions and actual location reconnaissance.

Of particular interest was The Cape Horner’s International Museum in St Malo, dedicated to the intrepid Cape Horners of the 17th and 19th centuries. The tower in which the museum is housed was built in the 14th century. The ground floor of the museum tells the story of their long-haul sea voyages, starting with the Dutch discovery of Cape Horn in 1616. The second floor is dedicated to the actual ships, their sailing conditions, the kinds of cargo they carried. The museum also houses some fascinating model ships, engravings, navigational instruments, logbooks, and the trinkets created by sailors to wile away the time during long weeks at sea. 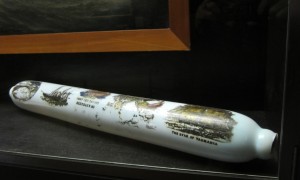 Lovingly crafted by some sailor long ago

One such trinket was an opaque glass rolling pin decorated with salty images including the Star of Tasmania. She was an Aberdeen clipper, of 632 tons, belonging to the White Star Company. The vessel was shipwrecked in1868, in New Zealand. Most of those on board survived but one wonders whether the sailor who crafted this artefact was among them – or did he perish in the sea? 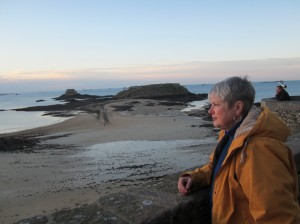 Kathy on the ramparts, St Malo

After taking in the exhibits, climbing up on to the roof of the tower is well worth the effort as you are rewarded by a magnificent panorama of the town, one of the most picturesque in the region.

One aspect that I spent some time investigating was the iron-bound coast of Brittany and the incredible dangers to shipping that this posed in Kydd’s today. The Admiralty Pilot tells of subsea granite reefs without number, tides of more than thirty feet that produce fast and treacherous cross-currents at different states of the tide: from our apartment window in the ramparts at high water there are three offshore islands visible. At low water springs there are eighteen! 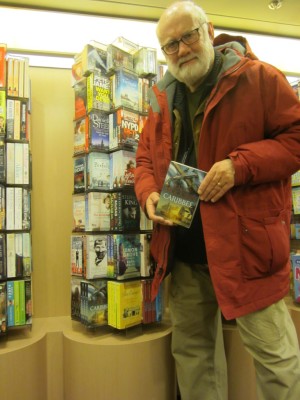 On board Bretagne, look what I found in the bookstore!

The Malouin matelot must have been a right oragious seaman. And of course he was: the explorer of Canada, Jacques Cartier, the ocean corsair Surcouf and the privateer turned royalist Admiral of the Fleet Duguay-Trouin are all St Malo natives.

All too soon it was time to return to the UK and collect our two much-loved Siamese from the cattery then download the many, many digital photographs I took and write up my research notes.

Copyright notices
Every effort is made to honour copyright but if we have inadvertently published an image with missing or incorrect attribution, on being informed of this, we undertake to delete the image or add a correct credit notice