Although my primary interest is in the Age of Fighting Sail I’m always drawn to books dealing with the engrossing story of man’s exploration and exploitation of waterways and then the sea. In this book, Seán McGrail’s study of European Water Transport (published in 2014) moves out to cover Egypt, Arabia, India, Southeast Asia, China, Australia, Oceania and the Americas. Each chapter presents a convincing picture of ancient boat building and seafaring in that region. The early rafts and boats of those regions were, as in Europe, hand-built from natural materials and were propelled and steered by human muscle or wind power and this volume ranges in time from the prehistoric to today when a number of such traditional craft continue to be built. As a qualified shipwright myself I particularly relate to the extensive and well chosen selection of diagrams and photographs of construction of such craft included in this book. 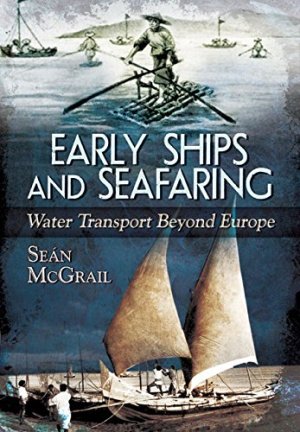 McGrail served in the Royal Navy before embarking on a career in maritime archaeology. He was Chief Archaeologist at the National Maritime Museum, Greenwich and is currently Visiting Professor of Maritime Archaeology at the University of Southampton.

The study of water transport – how early rafts, boats and ships were built and used – is a fairly new and fascinating area of study in archaeology.

In Egypt, not only have accounts, models and illustrations of ancient rafts and boats survived but also a number of the early vessels themselves have been excavated, some dates as early as the 3rd Millennium BC. In regions such as the Americas, on the other hand, few ancient craft have been excavated but we are able to draw on accounts and illustrations compiled from the 16th century onwards by European seamen and explorers.

In most regions of the world a variety of water transport has been built, limited only by the raw materials available. On the island of Tasmania, however, an early rise in sea levels cut contacts with Australia, leaving Tasmanians with simple types of Stone Age water transport that fascinatingly survived in use until Europeans ‘discovered’ them.

McGrail admits that worldwide, much remains to be learnt about early water transport by excavation and by ethnographic studies of those traditional rafts and boats that have survived. I look forward to more discoveries in this compelling field.

[ my earlier review of Water Transport within Europe ]

← TYGER: “A very rich and satisfying reader experience”
Out and About with TYGER! →