In our household I’m the hoarder; not only physical artefacts from the past, numerous tins of assorted screws & wires, books & journals – but countless snippets and esoteric facts from the Golden Age of Sail. Over the years I’ve filed these away, adding to them when I started the Thomas Kydd series and began extensive research on the Georgian Navy. Someone once said that an author only uses 10% of the research he undertakes, but you never know which 10% that will be! So true! And this was the reason I wrote STOCKWIN’S MARITIME MISCELLANY. It gave me a way to share some of the fascinating facts and sea lore I’d tucked away.

So – cauls, Mary Carleton and the Chatham Chest! Just three of the hundreds of items in my little non-fiction title. 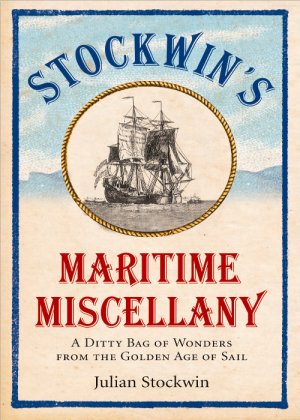 The thin membrane covering the heads of some new-born children was esteemed by Old Salts. They believed it would guard against drowning and shipwreck. One advertisement in a Georgian newspaper announced the sale of a caul ‘having been afloat with its late owner forty years, through the periods of a seaman’s life and he died at last in his bed, at his place of birth.’ Sailors paid handsomely for these talismans, often sewing them into their canvas trousers. (Back in ancient Rome lawyers also favoured the caul, taking it to guarantee they would be eloquent and successful in all their cases, but I digress…)

Port Royal, until it was swallowed by the sea, was ‘the richest and wickedest city in the world’. Some of its ladies of the night have gone down in history with names like No-Conscience Nan and Salt-Beef Peg but the most famous of all was one Mary Carleton. A contemporary wrote of her: ‘A stout frigate she was or else she never would have endured so many batteries and assaults… she was a common as a barber’s chair; no sooner was one out, but another was in.’

The world’s first occupational pension. From 1590 all seamen in the Royal Navy made a contribution of six pence per month to support the Chatham Chest, which paid pensions to injured seamen. The assets of the fund were kept in an actual chest at Chatham dockyard, secured by five locks, which opened to five separate keys held by five different officers – an expedient intended to prevent misappropriation of the funds. The chest exists to this day and may be seen at the Chatham Historic Dockyard museum.

Every effort is made to honour copyright but if we have inadvertently published an image with missing or incorrect attribution, on being informed of this, we undertake to delete the image or add a correct credit notice

3 Comments on “Cauls, Mary Carleton and the Chatham Chest!”