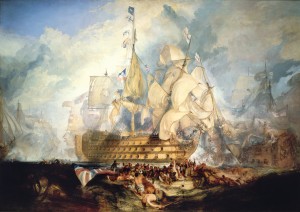 The Battle of Trafalgar

Joseph Mallord William Turner, the greatest of the English Romantics and colourists, (1775-1851) was born in London, a stone’s throw from the River Thames. His father (like Tom Kydd’s) was a wig-maker.
Although he painted many subjects, water would hold a fascination for Turner for the whole of his life. His seascapes range from peaceful early morning vistas of fisherfolk on the sands to incredibly violent storm scenes to experimental, impressionist creations. I particularly like his storms!

Self portrait of the artist

The story that Turner had himself lashed to the mast of a ship so that he could experience a storm at sea has never been verified – but I like to think it may well be true…
It has been estimated that two thirds of Turner’s paintings are to do with the sea in some form. National Maritime Museum Curator Christine Riding says: ‘It was his great subject, because I think it suited his temperament perfectly – ever changing, ever dramatic, different in every light and weather, violent or calm, and often used to represent the state of the island nation.’

Turner’s work is valued not just for its intrinsic appeal but also as potent social or moral commentary. This is true of his iconic ‘The Battle of Trafalgar’, commissioned by King George IV in 1822. The painting combines a number of incidents from different times during the battle and some have criticised this as a departure from the historical record. But I feel that artists are entitled to reflect their feelings in their work and the message is clear – a glorious victory, yes, but the suffering was great and the cost to the nation was more than the death of a national hero.
Another of his most famous works, ‘The Fighting Temeraire’ (voted the nation’s favourite painting) again takes liberties with reality. It is a stunning work however. You can read so much into it, not just the passing of the age of sail to steam, but death and regeneration… 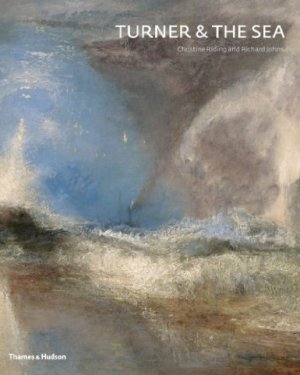 I was delighted to receive a review copy of a book published to coincide with a major exhibition at the National Maritime Museum in Greenwich. Entitled ‘Turner & the Sea’ it’s a magnificent nearly 300-page visual celebration of the great artist’s range and skill in his engagement with the sea. The majority of the 200 paintings in oil, watercolours, etching and sketches are by Turner but the book also contains works by a number of other artists who were influenced by Turner. As well, eight contributors to the book bring new scholarship to our appreciation of how Turner responded to the maritime art of the past while challenging his audience with new ways of representing the sea. A treasured addition to my library!

I plan future blogs on some of the other maritime painters I particularly admire.

The exhibition of Turner’s sea paintings runs from today until 21 April 2014.

Copyright notices
All images: J. M. W. Turner [Public domain], via Wikimedia Commons
Every effort is made to honour copyright but if we have inadvertently published an image with missing or incorrect attribution, on being informed of this, we undertake to delete the image or add a correct credit notice

2 Comments on “The Sea Painters: Turner”