In Artemis, one of the books in the Kydd series, the ship’s crew are on a scientific voyage around the world. They find themselves ashore in the Philippines one Christmas day. When I wrote this I drew on personal memories of a wonderful Christmas Kathy and I experienced a few years back in a remote sea-side village in the Central Visayas.

The ship’s company of Artemis padded down the jungle path, Captain Powlett and the first lieutenant leading with Goryo and Pinto, the rest following respectfully behind, all in their best shore‑going rig. Stirk shouldered a sea‑chest, and was flanked by Kydd and Crow, who also carried small bundles. 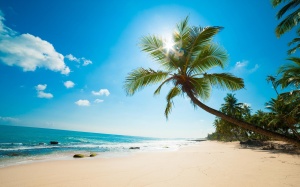 There would be no danger from the indolent Spaniards on this holy day and so far from the provincial centres; Powlett could rest easy with his men ashore for a few hours – a warning cannon from the ship would have them back in minutes.

As they walked the familiar sounds of the sea fell behind, replaced by the curious cries of geckoes, the swooping mellow call of the oriole, the screech of parrots. Sudden rustles in the undergrowth were perhaps wild pigs or other, unknown, species.

They halted at the edge of the village and were met by the wizened cabeza. His formal speech was rendered in Spanish by Goryo and in turn to English by Pinto. The words may have suffered on their journey but the sentiments were plain. Powlett bowed and they moved on into the village. The inhabitants stood in awe, grouped in the open clearing before the nipa palm thatched huts. To one side a glowing pit was tended by the old men of the village, whose job it was to slowly turn the lechon – an enormous spitted roast pig.

Gracefully shown to one side, the Captain sat with the cabeza at the only table with a covering, Goryo and Pinto standing behind. The rest of the men sat cross‑legged on the bare earth, keenly aware of the tables on the opposite side of the clearing waiting to be loaded with food. 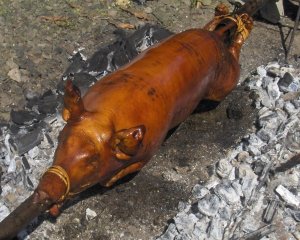 Stirk placed the sea‑chest strategically behind Powlett. It contained unused remnants of finery left over from Lord Elmhurst’s entourage. At the right time it would be brought forth, but not now.
Chivvied by one of the adults a file of children approached, and shyly presented to each man a little package wrapped in a charred banana leaf. Unsure, the men looked to their Captain. Powlett gingerly unwrapped the parcel. Inside was a discoloured rice cake. ‘Bibingka,’ said Goryo with satisfaction.

Kydd did likewise, and bit into it. The taste was a chaotic mix of flavours that made him gag. Powlett recovered his composure first and politely enquired of the cabeza. It transpired they were eating gelatinous rice with fermented coconut milk and salted eggs.

Pressed into line, the children sang. It was a remarkably un‑self‑conscious performance; full, melodious and clear but no tune that Kydd could recognise. Renzi sat next to him, delicately picking at his bibingka. He didn’t respond to Kydd’s comment, wearing a far‑away look that discouraged talk.

A hush descended. Powlett got to his feet. ‘Boatswain’s mate!’ he growled, ‘pipe “hands to carols”!’ Hesitating only for an instant, the man’s silver whistle whipped up and the call pealed out, harsh and unnatural in the jungle clearing. ‘Haaaands to carols!’ he roared.

The men stood up and shuffled their feet. ‘Away in a manger,’ snapped Powlett. ‘Awaaaay in a manger!’ bellowed the boatswain’s mate. 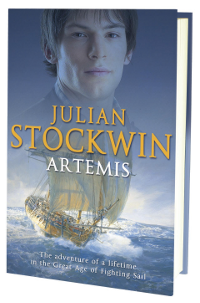 Doud’s voice sounded out first, pure and clear. A bass picked up and others followed, and soon the ship’s company was singing forth in unison. Kydd stole a glance at Haynes. The hard petty officer was singing, his voice low and heart‑felt. He wouldn’t meet Kydd’s eye, and Kydd felt his own eyes pricking at the buried memories being brought to remembrance in this unspeakably far away place.

The children watched wide‑eyed, wondering at the volume of sound the seamen produced, but when two or three more carols had been sung, they stepped forward and drew the men over to the tables where the feast had been laid.

No matter that the comestibles were as different from their normal fare as the exotic jungle chaos from the warlike neatness of a frigate. Language difficulties happily drew a veil over the true identities of the delicious fruit bat broth, the ant‑egg caviar and the dogmeat in nipa and wild garlic. The men ate lustily.

The children squealed in joy as they were carried on the shoulders of a fierce sailor, then thrown in the air and caught by those who in another world could effortlessly reach in darkness for invisible mizzen shrouds and then swarm aloft. A red‑faced Doody had them screaming in delight as he very realistically became a village pig and snorted and oinked at them from all fours. Others were chased shrieking about the compound by a burly boatswain’s mate and a tough gun captain, but the act which stole the show and had Powlett’s eyebrows raising was Bunce and Weems doing an excellent imitation of an indignant sergeant drilling a private soldier up and down, carrying a ‘musket’ of bamboo.

The afternoon raced by; the drink on offer was lambunog, specially fermented for the occasion the previous evening from palm tree sap. This was served in half coconut shells, but its pale pink viscid appearance and stomach turning strength gave pause to even the stoutest friend to the bottle.

Evening approached. The probable nearby presence of a volcano added violence to the red of the promising sunset, and Captain Powlett reluctantly got to his feet. ‘Pipe all the hands,’ he ordered. The shriek of the boatswain’s calls pierced the din. With a bow, Powlett presented the contents of the sea‑chest and bundles and in the enthralled stillness the sailors quietly left.

Artemis put to sea immediately, subdued and replete with last‑minute mangoes and bananas. Men looked astern as the ship heaved to the long Pacific swells, privately contrasting the spreading gaudy sunset behind them with the anonymous dark blue vastness ahead.

Now read on for my fellow bloggers’ contributions — and a very Merry Christmas and Happy New Year to you all from Kathy and myself!