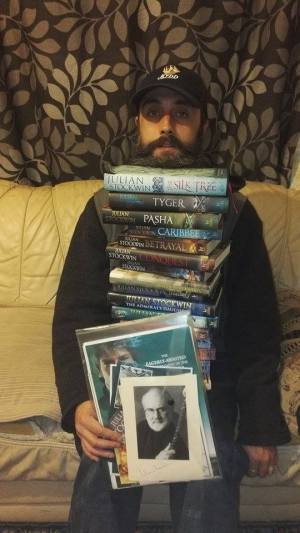 With the publication of Persephone this month I will have 21 books in print; 18 in the Kydd series, two historical standalones and a non-fiction work. I feel very privileged to be able to earn my living as a writer and I’m looking forward to penning more Kydd titles and possibly several further standalones – or a trilogy. For the short term, however, I’m focused on the Kydd series – two titles this year and two next year in my current contract. 2017 will be a busy year for Team Stockwin, with two hardbacks and two paperbacks coming out! And of course the titles will be available as ebooks and audiobooks.

The Powder of Death paperback

‘We know Julian Stockwin best for taking us on adventures on the High Seas with Captain Kydd not the Medieval world of Knights and Castles, but don’t let that put you off – this is every bit as good!’ — Amazon 5-star review 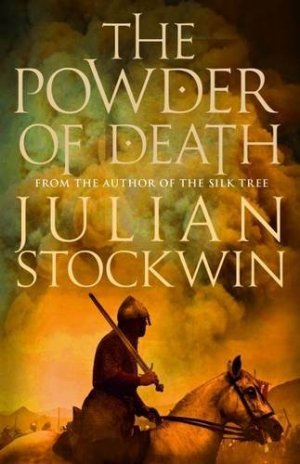 1261. Oxford, England. An envoy returns from the land of the Tartars to meet with an English scholar and share a deadly secret. The two men vow that the knowledge of gunpowder must die with them as the consequences are otherwise too fatal to contemplate.

1290. Hurnwych Green, England. After his quiet life is shattered by tragedy, blacksmith Jared begins a pilgrimage to the Promised Land. Along the way he is invited to join the Knights Hospitallers as their blacksmith on a holy crusade for King Edward. The adventure that follows sees Jared encounter men from distant Cathay who harbour the secret of huo yao, and so begins one man’s obsession with the powder of death and a king’s determination to change the very nature of warfare.

‘Julian Stockwin is one of the best current authors in this genre. His books are always awesome and Inferno is no exception.’ — Amazon 5-star review 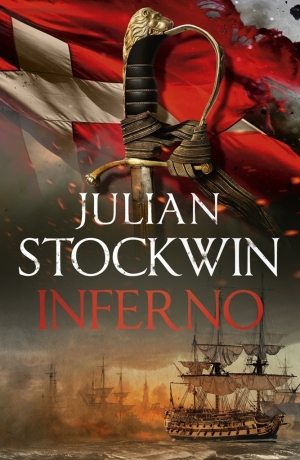 1807. Captain Sir Thomas Kydd’s famous sea action aboard Tyger has snatched his reputation from ignominy. He is the hero of the hour. But though Britain’s Navy remains imperious, a succession of battles has seen Napoleon victorious on mainland Europe.

In an attempt to prevent the French from taking control of Denmark’s navy, Kydd’s great friend Nicholas Renzi – now Lord Farndon – is sent on a desperate diplomatic mission to persuade the Danes to give up their fleet to Britain. But the Danes are caught between two implacable forces and will not yield, opting instead for the inferno of battle.

To be released May 18

‘I have to say that without a doubt, Persephone was an absolute joy to read. I have hardly slept for the last few nights as I have really struggled to put it down.’ — early reader 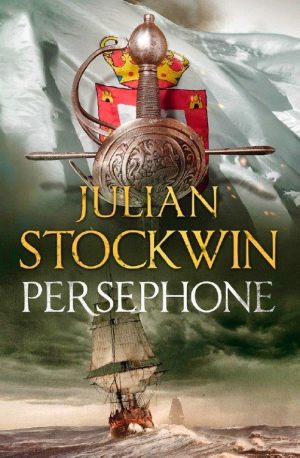 November 1807. Captain Sir Thomas Kydd must sail to Lisbon to aid the Portuguese Royal Family’s evacuation in the face of Napoleon’s ruthless advance through Iberia. In the chaos of the threatened city an old passion is reawakened when he meets Persephone Lockwood, a beautiful and determined admiral’s daughter from his past.

But the Royal Family’s destination is Brazil, Persephone’s England, and it seems Kydd’s chance has gone again. Only later he discovers Persephone has another suitor – and that, if he wants to win her hand, he must enter the highest echelons of London society.

Mixing with aristocracy and royalty brings other responsibilities. The Prince of Wales asks him to take temporary command of the Royal Yacht. Sailing to Yarmouth, Kydd realises they are being stalked by French privateers. The terrible threat of a prince of the blood being captured sees Kydd call on daring seamanship of the highest order.

Will be launched May 18 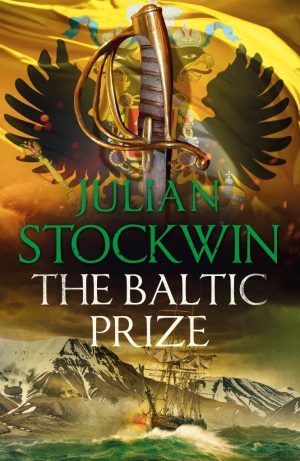 1808. Parted from his new bride, Captain Sir Thomas Kydd is called away to join the Northern Expedition to Sweden, now Britain’s only ally in the Baltic. Following the sudden declaration of war by Russia and with the consequent threat of the czar’s great fleet in St Petersburg, the expedition must defend Britain’s dearly-won freedom in the those waters.

However Kydd finds his popular fame as a frigate captain is a poisoned chalice; in the face of jealousy and envy from his fellow captains, the distrust of the commander-in-chief and the betrayal of friendship by a former brother-in-arms now made his subordinate, can he redeem his reputation?

In an entirely hostile sea Tyger ranges from the frozen north to the deadly confines of the Danish Sound – and plays a pivotal role in the situation ensuing after the czar’s sudden attack on Finland. This climaxes in the first clash of fleets between Great Britain and Russia in history. To the victor will be the prize of the Baltic!

All the books will be available worldwide, usually a month or so after the UK publication date.
The Collectors Sets
For each new title I offer a Collectors Set. Each Set comprises a signed, numbered and embossed UK First Edition plus a signed cover postcard. Each issue is strictly limited to 500 in number. The Persephone Collectors Set is fully subscribed but there are still some unreserved for The Baltic Prize. Secure yours here.
Standing Orders
A number of readers have asked whether they could have a Standing Order for all future Collectors Sets. Just email with your postal details and ‘Sign Me Up for All Future Collectors Sets’ in the subject line.