Hats off to Sim!

Sim Comfort’s eclectic treasure trove of coins, medals, paintings, swords and other naval items has been built up over many decades. An American by birth, Sim joined the US Navy at age 18. The US Naval Security Group sent him to Guam and later to London, where the National Maritime Museum sparked a life-long love affair with British naval history. His interest in collecting named Davison’s Nile, Boulton’s Trafalgar and Earl St Vincent’s Medal of Approbation medals began in 1970 when he purchased a bronze-gilt Davison Nile medal, awarded to George Thompson, HMS Defence, 1798. Sim had to know who made these marvellous medals, who received them, who designed them, who paid for them, how were they distributed, what were they like. Matthew Boulton’s Naval Medals answers all these questions. 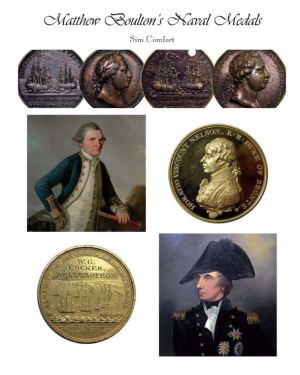 Matthew Boulton was a prominent Birmingham industrialist. His first medal was the Otaheite medal conceived by Sir Joseph Banks, which was to be presented to peoples yet discovered on Captain Cook’s second and third voyages.

As well as a wealth of information on the actual medals, this book recounts the life stories of the men who received them, along with battle details of both the Nile and Trafalgar. Included for the Nile are the accounts by the American-born Captain Ralph Miller who commanded Theseus and the French artist and author Vivant Denon, who witnessed the battle.

Matthew Boulton’s Naval Medals is a work that makes an important contribution to naval scholarship and is commended as a superb addition to the library of any serious student of the Napoleonic period. Most handsomely presented, the book is offered as a limited edition of 500 copies; it is available for £125.00 plus postage from Sim Comfort Associates

Sim has published a number of fine reprints on naval subjects, including David Steel’s ‘Elements and Practice of Rigging and Seamanship.‘ He has also authored three other important books based on his collection, ‘Forget Me Not‘ (a study of naval and maritime engraved coins and plate), ‘Naval Swords and Dirks‘ (British, French and American weapons, 1730-1830) and ‘Lord Nelson’s Swords‘.

Sim’s guest blog is on the naval medals of England

← Discovering Kydd: What’s Your Story?
Stockwin Titles: What’s Out When →