Over the previous months I’ve been celebrating the earlier titles in the Kydd Series, it’s Conquest for this blog. I’d love to hear your thoughts on the book, either as a first-time reader or if you’re a re-reader and have read it more than once! It’s very gratifying for an author to be told that his work has inspired people to go back and read it again. And some of you have told me you have done this more than twice! Either reply to this blog or email me with your thoughts on Conquest. Every respondent goes into the hat for a chance to win a mystery prize.

‘Stockwin assembles an exciting and suspenseful historical loaded with action, intrigue, treachery, and the bloody gore of 1805 warfare. Captain Thomas Kydd returns to sea after the cataclysmic Battle of Trafalgar in command of L’Aurore

for a joint army-navy expedition to capture Cape Town, South Africa, from the Dutch and expand the British Empire. But in a puzzling move, the Dutch surrender, leaving the British with a restive and reluctant overseas colony while hidden enemy forces prepare to attack. As the threat grows, Kydd tumbles into bed with a beautiful and dangerous French expatriate royalist.

When Kydd’s sidekick, Nicholas Renzi, stumbles into a deadly plot, Kydd risks his ship, career, and life committing an offence for which he may well hang. Even his own crew disapproves of his actions and questions his motives. Stockwin, a retired lieutenant commander of the British navy, fills this tale with the colourful history of British imperialism, as well as vivid and lush descriptions of colonial South Africa, professional seamanship, bold leadership, and the friendship of two men who share the perils of life at sea in the Royal Navy.’ — Publishers Weekly

Baird on his wife… 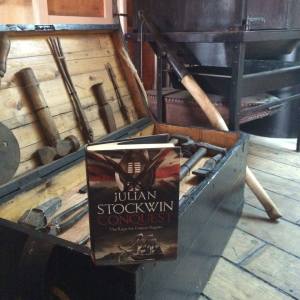 David Baird, one of the real-life personages who appears in the book, was born in Scotland and entered the army in 1772. He was a major-general when he commanded the expedition to take the Cape of Good Hope. He liked to wear a curved blade taken from the body of Tippoo Sahib after he stormed Seringapatam during the Anglo-Mysore wars. His left arm was amputated after he was wounded by grapeshot at Corunna in 1809. He married the following year. A devoted husband he liked to jest: ‘I could command 10,000 men, yet I cannot command one woman.’

The Portuguese explorer Bartolomeu Dias mentioned the area in 1486. Vasco da Gama recorded a sighting of the Cape of Good Hope in 1497. In the late 16th century, Portuguese, French, Danish, Dutch and English ships regularly stopped over in Table Bay en route to the Indies. They traded tobacco, copper and iron with the Khoi-khoi in exchange for fresh meat.

Located on the shore of Table Bay, Cape Town was first developed by the Dutch East India Company as a victualling station for Dutch ships sailing to East Africa, India, and the Far East. Jan van Riebeeck’s arrival on 6 April 1652 established the first permanent European settlement in South Africa. Cape Town quickly outgrew its original purpose as the first European outpost at the Castle of Good Hope, becoming the economic and cultural hub of the Cape Colony. Until the Witwatersrand Gold Rush and the development of Johannesburg, Cape Town was the largest city in South Africa.

The views from Table Mountain are spectacular. Although you can walk up, when Kathy and I were there on location research for the book we cheated and took the cable car. At its highest point Table Mountain is 3563 feet. When the wind is in the southeast Table Mountain has its own cloud cover that spills down the sides of the mountain, ‘the tablecloth’.

Previous blog on Conquest : CONQUEST – The race to empire begins!
CONQUEST has been published in the UK/US in English, in translated editions and in ebook, large print and audiobook.
Buy on Amazon or The Book Depository (free postage worldwide!) Also available at most bookstores.
Detailed list

Copyright notices
Conquest aboard Victory by Paul Waite
Every effort is made to honour copyright but if we have inadvertently published an image with missing or incorrect attribution, on being informed of this, we undertake to delete the image or add a correct credit notice