Caribbee: A return to turquoise seas

A regular feature looking back on each of the Kydd titles – with story background, research highlights, writing challenges and more.

And thank you for all your kind comments on the post about my thirteenth book, Betrayal.

The fourteenth book in the series is Caribbee which sees Kydd and Renzi back in the torquoise seas last visited in Seaflower, when they were sailors before the mast.

Location research for this book took me to the Caribbean and as a former naval shipwright I was particularly interested in what remained of the naval dockyards of Kydd’s day. 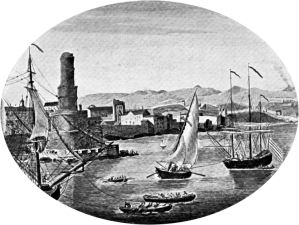 Sadly, much of Port Royal is now gone or in a sad state of repair, but the area has a fascinating history.

It was once ‘the richest and wickedest city in the world’. Originally just a sand spit, it was favoured by the Tainos, the indigenous people of the area, as a fishing camp. When the Spaniards arrived in Jamaica, they used the spit for cleaning, refitting and caulking of their sailing vessels.

The British took Jamaica in 1655 and, realising its strategic importance, put fortifications in place and began careening their naval ships there.

By the 1660s buccaneers, cut-throats and prostitutes made up most of the 6500 residents of Port Royal. There was one drinking house for every ten residents, along with merchants, goldsmiths, artists – and even several places of worship!

Although he died well before Kydd’s time, Henry Morgan’s reputation as one of the most notorious and successful pirates/privateers in history, ensures his name lived on

Port Royal became the virtual capital of Jamaica, and also headquarters for pirates such as Henry Morgan who brought in treasure looted on the Spanish Main.

However on June 7, 1697 disaster struck; Port Royal was destroyed by an earthquake. A large portion of the town sank into the sea and two fifths of the population perished.

The houses and fortifications were rebuilt on what by then was an island separated from the rest of the Palisades, but in 1703 a fire destroyed the settlement. Although the town was largely rebuilt, hurricanes in 1712, 1722 and 1726 ensured that Port Royal would never again rise to its former glory as all the merchants shifted across the harbour to settle in Kingston, a less healthy but safer site than Port Royal. The Royal Navy continued to use the area for careening however, and a number of naval storehouses and accommodations were erected.

After the Napoleonic wars Port Royal diminished in importance and the Naval Dockyard eventually closed in 1905 and slowly sank into disrepair.

At the careening capstan, Nelson’s Dockyard

By contrast, Nelson’s Dockyard at English Harbour is flourishing today, the only Georgian-era dockyard still in use.

Historically its position on the south side of the island meant it was well positioned to monitor the neighbouring French island of Guadeloupe and it afforded good protection against hurricanes.

By 1707 naval ships were using English Harbour as a station but it wasn’t until 1728 that facilities were built for maintenance and repair. Construction of the modern dockyard began in the 1740s and grew to include mast houses, saw pits, stores and all the various specialist facilities required to service the ships. (Nelson’s tenure in the dockyard was from 1784 to 1787.)

In 1889 the Royal Navy abandoned this dockyard but it re-opened in 1961 after extensive restoration and is now a world-class tourist attraction.

It’s given me great pleasure to learn that after reading Seaflower and Caribbee a number of readers have travelled to the Caribbean and followed in Kydd’s footsteps, so to speak. There is still much to be seen that has changed little and I commend a visit!

Copyright notices
Captain Morgan image: By Alexandre Exquemelin ,an artist known for making book about pirates (http://www.pinterest.com/pin/137078382381276155/) [Public domain], via Wikimedia Commons.
Port Royal image: By Old_Port_Royal_-_Project_Gutenberg_eText_19396.jpg: John Masefield derivative work: Beao (Old_Port_Royal_-_Project_Gutenberg_eText_19396.jpg) [Public domain], via Wikimedia Commons
Every effort is made to honour copyright but if we have inadvertently published an image with missing or incorrect attribution, on being informed of this, we undertake to delete the image or add a correct credit notice

4 Comments on “Caribbee: A return to turquoise seas”