BookPick: A Home on the Rolling Main 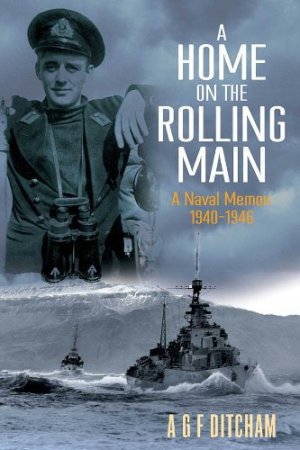 Home on the Rolling Main

I always enjoy naval memoirs and Tony Ditcham’s has to be among the most engaging I’ve read recently.

From first joining the Royal Navy in 1940 until the end of the campaign against Japan, Ditcham was in the front line of the naval war. After brief service in the battle-cruiser Renown off Norway, he went into destroyers and saw action in most European theatres against S-boats and aircraft in ‘bomb alley’ off Britain’s East Coast, on Arctic convoys to Russia, and eventually in a flotilla screening the Home Fleet.

During the dramatic Battle of the North Cape in December 1943 from his position in the gun director of HMS Scorpion he had a grandstand view of the sinking of the great German battleship Scharnhorst. Later his ship operated off the American beaches during D-Day, where two of her sister ships were sunk with heavy loss of life, and he ended the war en route for the British Pacific Fleet and the invasion of Japan.

Ditcham tells his story with humanity, humour and a seaman’s respect for Neptune’s realm. Sadly, as the surviving veterans rapidly decline in numbers, this may turn out to be one of the last great eyewitness narratives of that conflict. The ‘Naval Review’ was fulsome in its praise:

‘As a story of World War II at sea, seen through the eyes of one young man growing up, this is, and I do not think I am exaggerating, a masterpiece.’

I think I have to concur.

← Who Really Sank Bismarck, the Pride of Hitler’s Fleet?
‘I discovered Kydd in Kazakhstan!’ →