I’ve had questions from a number of readers recently asking about the different rates and ranks in Kydd’s day, so herewith a ready reference. 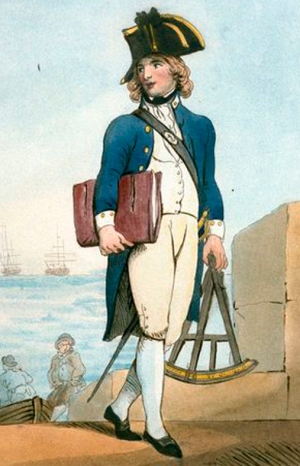 In the Georgian Navy the main division was between officer and seaman. There were very few who crossed the boundary (as Kydd did) between them.

The officer was a gentleman, the seaman of the common sort (but if he made officer he could become a gentleman, able to enter society and carry a sword etc.). Neither side encouraged ‘coming up by the hawse’ (making the transition from seaman to officer). There was a reluctance by the Admiralty to take top seamen, with all their irreplaceable skills and experience, and make them junior officers. And the men regarded the step with suspicion; there was a saying in my day – ‘I’d rather be cream of the s— rather than the s— of the cream.’

The Seamen
A sailor is anyone who goes to sea, including cooks etc. A seaman is one with the calling and gifts to be respected as one. A mariner is a deep‑dyed seaman. These terms may be applied to an officer, but not ‘Jack Tar’ which is for the men, as is a foremast hand/jack, old salt, tar, bluejacket.

The main divisions for Jack Tar are that of landman/seaman and seaman/petty officer. Their rating was awarded by the captain of the ship as a local title; they could be rated up or disrated by that captain.

Broadly, the progression on the lower deck was: 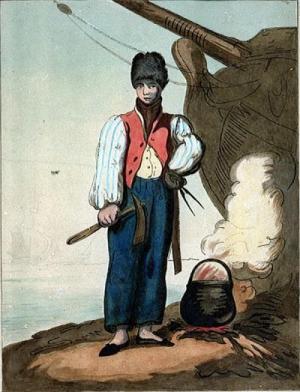 There were exceptions to the above:
A petty officer could be promoted to master’s mate, tasked to assist the master in navigation etc. He could be relied on to take over a prize vessel, lead a landing party and other skilled tasks.

A midshipman could also be promoted to master’s mate – one of the senior Reefers perhaps passed for lieutenant but not yet with a commission.

The idlers were the technical rates, who did not have to stand a watch. These had very limited promotional prospects: carpenter’s mate, steward, cooper’s mate, carpenter’s crew, surgeon’s mate etc

The cook held a warrant like a warrant officer, and was generally a seaman who had been crippled in action, but often knew only how to boil salt pork (the officers had their own cook/s).

The Officers
Officers were those who held the King’s commission.
The general progression was:

Do you have a question for ‘Ask BigJules’ – fire away! I’ll answer as many as I can in future posts…

Copyright notices
Images: Thomas Rowlandson [Public domain], via Wikimedia Commons
Every effort is made to honour copyright but if we have inadvertently published an image with missing or incorrect attribution, on being informed of this, we undertake to delete the image or add a correct credit notice

← QUARTERDECK: Aft through the hawse-hole
Team Stockwin on Air Tomorrow! →

21 Comments on “Ask BigJules: Rates and Ranks at Sea”