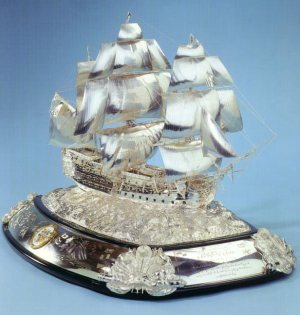 After seeing my blog on HMS Victory yesterday Mike Softley emailed me some photographs of a very special model he was involved with.

Mike takes up the story:

‘Victory was my second home for a while in 2004/5. I was making a model of the ship in silver to mark the 2005 celebrations. 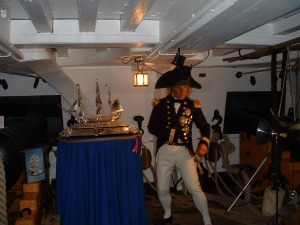 The model aboard Victory with historian Alex Naylor

I was lucky enough to have been on board  on the evening of 21st October 2005 with my model and was on the gun deck during the 52 gun broadside; I’m not sure whether I was supposed to have been left there, I was certainly alone when the unexpected noise started and the smoke seeped in!

The model was for a time in the National Maritime Museum at Greenwich; it was later given to HRH the Prince of Wales and is now, I believe, in Clarence House.

On October 21st – Trafalgar Day – the model was exhibited aboard HMS Victory at Portsmouth while Her Majesty Queen Elizabeth attended a commemorative dinner on board. The model was again featured in St Paul’s Cathedral on 23rd October at a special service attended by other members of the royal family.’ 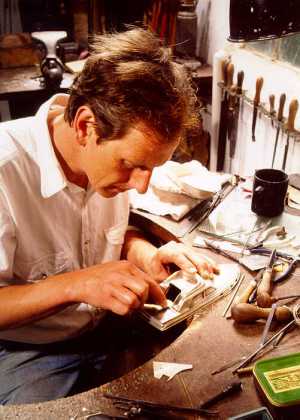 The model depicts HMS Victory just about to engage the enemy, moving slowly with a light following wind on the port stern quarter.

Creating the model took 18 months from conception to completion. There are over 1000 separate pieces in the model with two parts of the ship of particular complexity and detail – the beak and the gallery at the stern. The scale is 1:133.

Every effort is made to honour copyright but if we have inadvertently published an image with missing or incorrect attribution, on being informed of this, we undertake to delete the image or add a correct credit notice

← HMS Victory
From a reader with many miles under the keel →

9 Comments on “A Sterling Model!”