The Baltic Prize will be the next title in the Kydd Series. In the run-up to the official launch of The Baltic Prize on November 2 we’re holding a special contest for a prize of an early copy of the book. There will be five winners!
To enter, email julian@julianstockwin.com with the name of the birth town of Thomas Kydd. Please include your full postal address and ‘Baltic Prize Contest’ in the subject line. Five winners will be drawn on September 25 and notified by email

Here’s what two of my editors said of the manuscript of The Baltic Prize:

‘Another brilliant yarn, set against a series of terrific northern backdrops, full of suspense. Many congratulations – I’m sure that hosts of readers will be as enthralled by this one as I was.’

‘Many thanks for another superb Kydd outing. As usual you have mixed fascinating historical detail with stirring action and characterisation.’ 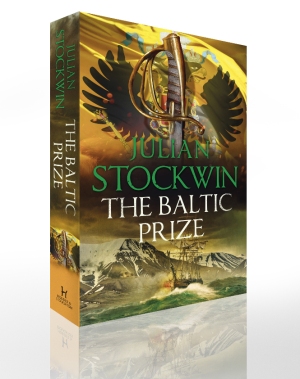 1808. Parted from his new bride, Captain Sir Thomas Kydd is called away to join the Northern Expedition to Sweden, now Britain’s only ally in the Baltic. Following the sudden declaration of war by Russia and with the consequent threat of the czar’s great fleet in St Petersburg, the expedition must defend Britain’s dearly-won freedom in the those waters.

However Kydd finds his popular fame as a frigate captain is a poisoned chalice; in the face of jealousy and envy from his fellow captains, the distrust of the commander-in-chief and the betrayal of friendship by a former brother-in-arms now made his subordinate, can he redeem his reputation?

In an entirely hostile sea Tyger ranges from the frozen north to the deadly confines of the Danish Sound – and plays a pivotal role in the situation ensuing after the czar’s sudden attack on Finland. This climaxes in the first clash of fleets between Great Britain and Russia in history. To the victor will be the prize of the Baltic!

The Baltic Prize will be available in hardback, ebook and audio download.

It will be launched at a special event at The Hayridge, Cullompton on November 2. Full details will be announced closer to the time.

You can also purchase at Book Depository, with FREE POSTAGE worldwide

1 Comments on “Win The Baltic Prize!”