The picturesque town of Weymouth is situated in the county of Dorset on the south coast of England. It has a long and proud history, with a number of maritime, sporting – and royal – connections. In 1583 Captain Richard Clark departed from there to join Sir Humphrey Gilbert in his discovery of Newfoundland. In 1588 English ships sailed from Weymouth to meet the Spanish Armada. 1789 saw the first visit of King George III to partake of the waters and he took a dip in Weymouth Bay using one of the first bathing machines. King George enjoyed his time at Weymouth so much that he became a regular visitor! And in more recent times, the town hosted 2012 Olympics sailing events. 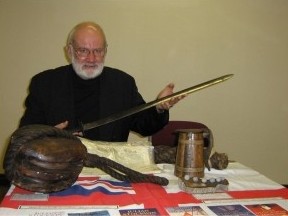 I was delighted to be invited to participate in the event, and as the themes of the festival are fear and courage it seemed appropriate that my talk be: ‘The Real Jack Tar.’ The legendary heroes of the quarterdeck – Nelson, Howe and Pellew – are deservedly famous, but what of the men of the fo’c’sle? The men on the lower deck were exceptional seamen, tough and loyal characters who have contributed to a sea culture that has flowered and endured over the centuries. But there is still much we don’t know about Jack Tar. It’s time for the real men to step out from the shadows and take their place among the heroes of the age!

I’ll also have a selection of some of my antique eighteenth century naval artefacts with me – and my books will be on sale; I’m happy to sign them on the day.

The festival organisers have put together a wonderfully varied programme that includes talks from curators from the National Maritime Museum in Greenwich, other writers, historians, broadcasters, journalists, sailors and photographers. There will also be a screening of the 1956 adaptation of Moby Dick and both a novel writing workshop and a photography workshop. Oh, and sea shanties, poetry, choral pieces, a sound installation and a maritime church service…

Events will be taking place across the town at venues including the Old Rooms Inn and the Royal Dorset Yacht Club.

Further information can be obtained from the festival organiser James Farquharson at info@weymouthleviathan.org.uk or phone 0788 7712472.
The festival website and Twitter @weyleviathan also have details.
Here’s the festival lineup and booking form. Hope to see you there!

Full details of the events in alphabetical order by surname.

If you’re looking for accommodation – the festival organisers suggest:
At Tripadvisor, filter Hotels in Weymouth to show B&Bs
Or try the Lodmoor Premier Inn
(The entire Harbour House has been booked for festival speakers so there’s no room availability there)

Copyright notices
Image of 2012 Olympic sailing: By Caroline Granycome (Flickr: 2012 Olympic Sailing, Weymouth, Dorset) [CC BY-SA 2.0 (http://creativecommons.org/licenses/by-sa/2.0)%5D, via Wikimedia Commons
Image of Weymouth waterfront: J. M. W. Turner [Public domain], via Wikimedia Commons
Every effort is made to honour copyright but if we have inadvertently published an image with missing or incorrect attribution, on being informed of this, we undertake to delete the image or add a correct credit notice