The history of Great Britain is inextricably linked to the sea and sea power. Invaders – Romans, Danes, Vikings and others – came by sea as did trade from the Mediterranean and beyond. Dominance of the sea between the seventeenth to early twentieth centuries led to the building of a great imperial empire. While some of our seafaring instinct and tradition may have ebbed, we are still an island nation with a rich appreciation of all things maritime. The two titles in this BookPick celebrate HMS Trincomalee, the oldest British warship afloat – and HMS Pickle, the second smallest British ship in Nelson’s fleet at the battle of Trafalgar. 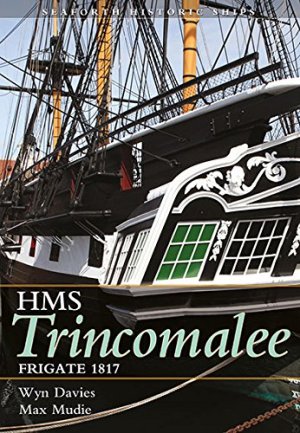 This book is part of the excellent Seaforth Historic Ships Guides series. Trincomalee belongs to a class of 38-gun Fifth Rates, the Royal Navy’s foremost frigate type in the Napoleonic Wars. She is now beautifully restored at Hartlepool, the last of the Nelson era frigates.

She’s had a long life. Built in Bombay of teak, in 1817, the Napoleonic wars were over however by the time she arrived in England in 1819. She was placed ‘in ordinary’ – demasted, in reserve. Her active service as a Royal Navy fighting frigate began with her first commissison from 1847-1850 under Captain Richard Laird Warren on the North American and West Indies Station. Her second commission from 1852-1857 under the command of Captain Wallace Houston was on the Pacific station. On her return to Britain she spent a number of years as a Royal Naval Reserve drill ship. In 1987 an extensive restoration was begun to restore her to her 1852 configuration. The result is considered one of the finest composite restorations in the world.

One of the aspects of this book that particularly appeals is the stunning photography by Max Mudie, and he deservedly gets equal billing on the cover with the author. Mudie’s love of tall ships is evident in the beauty and majesty of his images. The book also contains well-chosen historic images and reference diagrams of deck layout – a splendid production all round.

A few years back I was honoured to be guest speaker at a Pickle Night dinner at HMS Collingwood, the Royal Navy’s largest training establishment. (Pickle Night is the Warrant Officers and Chief Petty Officers equivalent of Trafalgar Night.) The evening was a splendid affair. A mock ship had been recreated in the Warrant Officers and Senior Rates Mess and Kathy and I were piped aboard, over a gangway! The fare would have done Kydd proud – Bosun’s Deepwater Trawl, Gunpowder Gruel and Cannonball Dumplings, Below Deck Duff & Rum Ration Sauce, Pusser’s Store Mousetrap & Hardtack and Yankee Wet Stuff & Mouth Shutters. During the evening dispatches about HMS Pickle’s famous voyage were read out and much good cheer abounded. A right roaratorious night!

Although only a tiny vessel, a topsail schooner, Pickle has earned enduring fame as the ship that carried Lord Collingwood’s dispatch announcing the death of Nelson and the victory at Trafalgar.

Pickle set off on October 26th 1805 and took 9 days to reach Britain after facing a gale off Cape Finisterre. She anchored in Falmouth Bay on November 4th and her captain John Lapenotiere started his journey to London, a trip that usually took a week was covered in 37 hours with 19 horse changes.

Peter Hore’s fascinating and well researched tome describes the ship’s beginnings as a civilian vessel called Sting, through conversion with 10 guns and her role with Admiral Cornwall’s Inshore Squadron for French reconnaissance in 1803. Pickle was also involved in the rescue of the crew of HMS Magnificent in 1804 and further reconnaissance missions. The book details other colourful episodes including a single-ship action against the French privateer Favorite in 1807. Pickle was wrecked in July 1808 when she was grounded as she entered Cadiz harbour but without loss of life.

A colourful story of one small ship and the courage and resolution of her crew.

← Behind the Lines at McBooks Press
Mega Contest! →