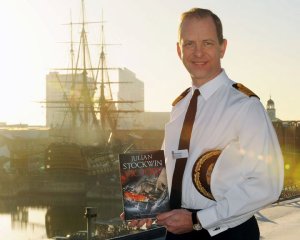 This month marks the 250th anniversary of the launch of Victory. Large ships such as Victory were not actually launched down a slipway running into the water but floated out of the dry dock where they had been built on level keel blocks.

Once in the water the task of fitting out could begin, transforming a hollow planked frame into a living, breathing fighting ship. From her steering gear to masts, hatches to capstans, pumps to officers cabins. And of course her guns – 104 of them on three gun-decks, from 12 pdrs to massive 42 pdrs.

This iconic ship already had a quite a number of years’ service before her most famous role as Nelson’s flagship at the Battle of Trafalgar, October 21, 1805.

In 1797 she returned to England, 32 years old, scarred and battle-weary. Late in that year, considered unfit for service, it was ordered she be converted into a hospital ship and eventual disposal. But fate intervened – as it would several times in her career – and when the first rate Impregnable was lost in Chichester Harbour there was an urgent need for another three- decker for the Channel Fleet. Victory was to be given a new lease of life! Refitting commenced at Chatham Dockyard in late 1800. 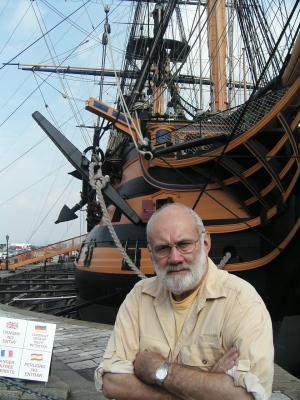 One of my many visits to Victory

Over the course of her active service she was flagship to many famous admirals – Keppel, Hyde Parker, Kempenfelt, Howe, Hood, Jervis, Saumarez – and Nelson.

A ship of the line like Victory required a great deal of timber for her construction; around 6000 trees were felled, mainly oak from the Wealden forests of Kent and Sussex. Her statistics are impressive: the vast amount of canvas that could be set meant a sail area a third larger than a football pitch; if laid end for end, cordage used for her rigging would stretch 26 miles.

Despite her age, she once stayed at sea for two years and three months without once entering port.

Victory’s magnificent figurehead is two cupids supporting the royal coat of arms surmounted with the royal crown. The arms bear the inscription of the Order of the Garter: ‘Shame to him who evil thinks.’ The current figurehead is a replica of the original one carved in 1801 at a cost of £50, which was damaged during the Battle of Trafalgar.

When I began writing the Kydd Series I came across some incredible statistics. In the bitter French wars at the end of the 18th century, there were, out of the six hundred thousand or so seamen in the Navy over that time, only about 120, who, by their own courage, resolution and let’s face it, brute tenacity, made the awe inspiring journey from the fo’c’sle as common seaman to King’s officer on the quarterdeck. This meant they changed from common folk; they became gentlemen. And that was no mean feat in the eighteenth century. Of those 120, just over 20 became captains of their own ship – and a miraculous 3 became admirals! After Nelson and Hardy, the two most important men aboard Victory at Trafalgar were cut from this cloth, both originally common seamen – John Quilliam, first lieutenant and John Pascoe, the signal lieutenant.

Victory and one of the ship’s upper deck guns

Although she was now well over 40 years old, considerably past the normal life span of a ship-of-the-line, Victory went on to further service in the Baltic and other areas. Her career as a fighting ship effectively ended in 1812. Ironically, she was 47 years old, the same age as Nelson had been when he died.

In 1831 Victory was listed for disposal but when the First Sea Lord Thomas Hardy told his wife that he had just signed an order for this, Lady Hardy is said to have burst into tears and sent him straight back to the Admiralty to rescind the order. Curiously, the page of the duty log containing the orders for that day is missing.

Victory was permanently saved for posterity in the 1920s by a national appeal led by the Society of National Research.

To this day Victory is manned by officers and ratings of the Royal Navy and now proudly fulfils a dual role as flagship of the First Sea Lord and a living museum of the Georgian navy.

It was my great privilege to have been given virtually unlimited access to the ship when I wrote my book Victory. Of course this was by no means my first visit, I must have made pilgrimage at least a dozen times before!

The official website
( A longer version of this article appears in the latest issue of Quarterdeck magazine A .pdf of that article is available on request to admin@julianstockwin.com )

Copyright notice
Every effort is made to honour copyright but if we have inadvertently published an image with missing or incorrect attribution, on being informed of this, we undertake to delete the image or add a correct credit notice

← BookPick: British Campaigns in the South Atlantic 1805-1807
BookPick: Support for the Fleet →