I’m delighted to launch a new contest with three special prizes! Each prize will be one signed copy of The Silk Tree or Stockwin’s Maritime Miscellany or Pasha, along with a special tote and a selection of bookmarks and postcards. The first draw will be on March 4, the second on March 11 and the third on March 18. Entry is via email to julian@julianstockwin.com – just write Book ‘n’ Bag in the subject line and please include your full postal address. You only need enter once: all entries will go into the hat for all draws. 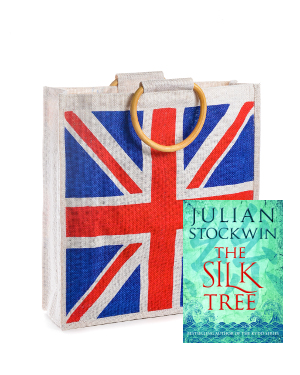 Julian Stockwin takes this tale and turns it into a fascinating story, full of colour and incident… [The characters] dovetail in perfectly and are totally believable participants in the story. I enjoyed this book very much
– Historical Novel Society

The Silk Tree is my first standalone novel, an epic adventure to unravel China’s most guarded secret, set in the time of Emperor Justinian.

This prize is A Signed First Edition of The Silk Tree and a fab Union Jack tote, along with postcards and bookmarks.

A dip in and come-again book – something for everyone!
– Cruising Association

Stockwin’s Maritime Miscellany is a little non-fiction tome full of fascinating facts and sea lore from the Golden Age of Sail. It ranges from the heroic voyages of discovery in the fifteenth century through the iconic Napolenic wars to the glorious era of the greyhounds of the sea, the clipper ships. A colourful world we will never see again!

This prize is a signed copy of Stockwin’s Maritime Miscellany and a fab Union Jack Tote, along with postcards and bookmarks. 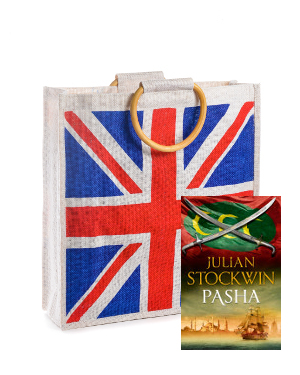 Kydd is on detachment in a new and dangerous sphere of interest: the Dardanelles, connecting the Mediterranean Sea to the Black Sea and providing a route to India. The French have long coveted this route, knowing that it could be the key to toppling the British Empire in India.

This prize is A Signed First Edition of Pasha and a fab Union Jack tote, along with postcards and bookmarks.

← The Bearded Mariner
BookPick: Light Upon the Waters →