She Speaks: The Silk Tree – Launched in Style!

Just returned to Devon after a whirlwind two days in London for the launch of The Silk Tree. The launch party was held at Goldsboro books and with wine flowing and spirited conversations all around the room, the guests spilled out into Cecil Court. Fortunately it was one of those lovely balmy evenings, unusual for this time of year in London. As I find I have a bit of RSI after signing so many books I’ve invited Kathy to share her thoughts on the night. 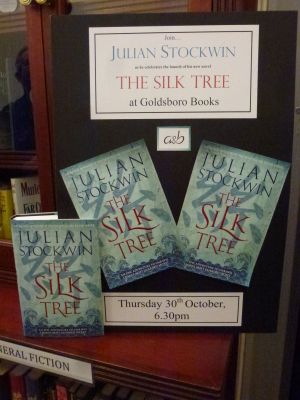 I always love visiting London – who wouldn’t! We took the train to Paddington on Thursday and came back yesterday. A shame we couldn’t stay longer but deadlines loom for Julian and he has more interviews and signings in Devon in the coming week so we had to get back. The main purpose of this trip was the official launch of The Silk Tree at Goldboro books on Thursday night. Both Julian and I have a great fondness for Goldsboro Books, and always visit their shop in Cecil Court when we’re in London. They’re now the UK’s largest specialist in signed First Editions and are run by two real book lovers, David Headley and Daniel Gedeon and their team. Cecil Court is charming in itself, a picturesque Victorian walkway full of antiquarians and map shops. You could browse there for hours!

At the launch Julian gave a short speech thanking the many people who had made the evening possible – his publisher Allison & Busby for the truly splendid production, Goldsboro’s David and Daniel for hosting the event and his literary agent Carole Blake. And of course the many guests who filled the room. Some were familiar faces and old friends; others he knew well but hadn’t seen before in his life! But these from the Twitterverse that he finally met, like fans Tom Stronach and his charming wife Ishbel.

Julian went on to speak about having in some ways come full circle that night. When he first started writing he’d immediately gone out and bought a number of writing manuals published by Allison & Busby – I guess they must have worked! We thought we still had a few on his reference shelves but then we remembered they’d been donated to a library writers’ group a few years back.

And here’s that scarf!

I was wearing a rather special silk scarf – actually the scarf that was the genesis of the book. When we were in Istanbul on location research I was haggling with a wily merchant in the Grand Bazaar while Julian was patiently standing back in husband mode. He got that glazed look in his eyes that I know very well and I realised that he was following through some train of thought. It transpired that he was wondering just how it was the secret of silk had been brought from China to the West. Well, the rest, as they say…

The Silk Tree will be available in both hardback and ebook

6 Comments on “She Speaks: The Silk Tree – Launched in Style!”