I was recently chatting to a reader who told me he enjoyed my blogs and mentioned that he’d like to see a Guest Blog from Kathy as she is so intimately connected with my work. She was up for it but I did wonder whether I’d done the right thing in inviting her to write whatever she liked, along with her choice of photographs. As any who know her are aware, she can be pretty straight talking.

Without any further ado, over to Kathy… 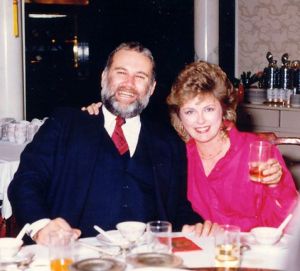 Partying in Hong Kong. The world of Tom Kydd had yet to open up…

Funny how things turn out in life: neither of us could have guessed that Julian Stockwin would one day would take his place among the greatest sea writers.

But let us begin at the beginning, when we first met.

I was a brand new educational psychologist rolling up for my first job, at a special centre for disturbed youngsters. I had an appointment with the head of the centre but as it happened he’d been urgently called away and I was told to wait in the staff room. I was a bit flustered as I’d driven over 200 miles from my home town, and had only recently passed my driving test (from a family, I hasten to add, where no-one drove a car…) In the staff room a dark-haired young man came up to me and asked if he could point me to the right room. I apparently curtly told him I knew exactly where I was supposed to be! Later I learned his name, Julian Stockwin; he was also a psychologist and had thought I was one of the hard-case female problem teenagers!

Not a good start. But over the coming months I began to think I had been a little too harsh in my dismissal… He obviously had a huge intellect, and wasn’t all that bad looking, either. And his wicked sense of humour was a plus as well. 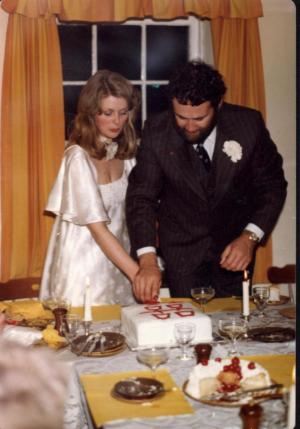 We became an item. When we got married about a year later we decided to seek adventure on the wider stage and left the little island of Tasmania to live in the Far East. Julian studied cross-cultural psychology at the university of Hong Kong for a time (but was seduced by challenges in the exciting new world of computers) and I took up journalism and eventually became the Asia editor of a worldwide magazine. Julian also revived his service in the navy by joining the Royal Naval Reserve and eventually made lieutenant commander. He was honoured by The Queen for his pioneering work on the naval control of merchant shipping. We had twelve wonderful years in Hong Kong but then an opportunity came for Julian to continue his computer systems design work in the UK. It was a big wrench leaving but in some ways it was a good time to go. China would soon be taking over and we knew the Hong Kong we knew and loved would change.

In the UK I had a number of interesting roles – running a customer service department, executive headhunting, and work in the retail sector. Julian, meanwhile, was developing specialist systems that would go on to be adopted by NATO.

However it was a very stressful environment for him and after the project was successfully completed I knew it was time to take stock. To this day I’m not quite sure why I suggested he try his hand at writing a book. The only ‘writing’ he’d done was business reports. Female intuition? Or perhaps my days as an editor had given me a sense of innate writing ability. Anyway, after initial resistance, we decided on a plan. He’d give up the computer systems design and take a half-time job lecturing while he applied himself to learning the craft of writing a book.

The topic came fairly quickly – for someone with salt coursing through his veins what else but the sea? And the great age of fighting sail had always been a draw for him. But where was the focus, the story? That was the challenge. 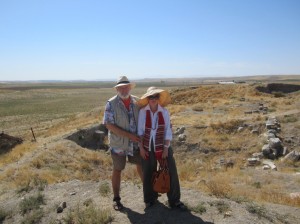 Travelling the world for Tom Kydd

Over the next few months Julian digested a great deal of research material and eventually came across some remarkable statistics. In the course of the 22 years of the French wars over half a million British seamen defended their country. Of these only a few hundred made the incredible journey to the quarterdeck, i.e. became officers, and of these 20 or so became captain of their own ship and a glorious tiny, tiny handful, made admiral. Julian had the hook for his story – it would be about one man’s journey from pressed man to admiral. And, in fact, we realised this had the potential to become a series.

I was still working full-time at this stage as we were under no illusions that Julian becoming a published writer could take a very long time.

When the manuscript of the first book, Kydd, was completed to our satisfaction we made a list of the top agents in the UK and decided we would work our way down, prepared for many rejections. However the god of debut authors was smiling on us and the agent Carole Blake (the very first agent we contacted) replied saying she was interested in possibly representing Julian.
But before that happened we had to visit Carole in her office to pass scrutiny. Carole takes on very few new clients and while she is warm and charming she is a very formidable presence. However something clicked. Carole soon had auctions going on both sides of the Atlantic, and was negotiating foreign language rights, audiobook rights etc.

It was a dizzy first year when Kydd came out and we travelled all over the UK for author talks, book signings, media events.
Julian resigned from his part-time teaching post and we decided to take the big gamble of my giving up the day job so that both of us could work full time on the Kydd Series.

My role encompasses editing, being a sounding board, administration, marketing and publicity initiatives, some research – in fact almost everything except the actual writing of the books. Julian calls me his ‘reality manager’ – the interface between his eighteenth century and the world outside.

We’ve travelled the globe with Tom Kydd and it’s also been great fun putting together Stockwin’s Maritime Miscellany with him and latterly an exciting new project, a stand-alone historical, The Silk Tree (which comes out in November). The Kydd series will continue, with a new book each year, but I’m delighted to see Julian’s maturing as a writer in tackling these other projects. 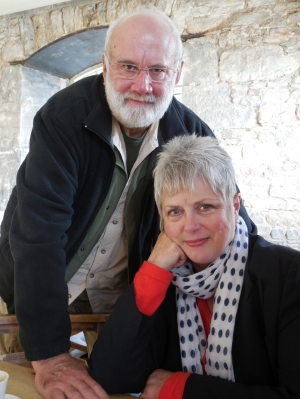 While we’ve not become rich in our literary endeavours (yet, she says hopefully…) we live comfortably and it’s a huge privilege to be able to work together. He can be difficult sometimes but then so can I! Initially, when I first started ‘editing’ his writing he would bristle, he being a ‘bleeder’ not a ‘gusher’. It would have been easy to back down but I stood my ground and now he trusts my judgement implicitly.

As I look back on our life so far I celebrate what we have experienced together and look forward enthusiastically to whatever the future may bring.