A Jewel of a Museum: Orlogsmuseet

On location research for the Kydd series one of the first stops I always make are the local sea connections. And on my latest trip, I was most agreeably taken with the Orlogsmuseet, the Royal Danish Naval Museum in Copenhagen. It’s a jewel of a museum, located in a former naval hospital on Christianshavn, near to the site of Nelson’s great battle with the Danes, where he used his telescope to good effect!

It houses one of the world’s finest assembly of naval models, some dating back to the late 17th century, the oldest ship, a vessel from the 1660s. The collection consists of several hundred large and small models, ranging from fully-rigged ships-of-the-line to entire docks and other dioramas. All the models display very fine craftsmanship and exquisite rigging detail. As was the practice in the Age of Sail in many countries, the models served as blue prints for ship builders.

Admiring this stunning model of Phoenix

One of the largest of the models is the ship-of-the-line Phoenix, launched in 1810. An incredible model, both in its size and detail. I wonder just how many thousands of hours it took to build!

There are also displays of ships’ equipment, uniforms and nautical art. Christoffer Wilhelm Eckersberg, a luminary of Danish painting, produced some very dramatic work which is represented in the museum.

A place to linger in and soak up the long and illustrious maritime history of Denmark! 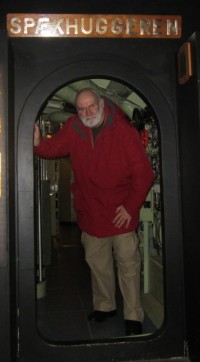 One exhibit that I had to pay particular attention to was the indoor display by section of the submarine Spaekhuggeren (killer whale). During my Cold War days in the Navy one of my NATO acquaintances was Orlogskaptajn Johan Knudsen. We are friends to this day and Spaekhuggeren was the first boat he sailed in – and his last command.

The children’s section of the museum is great fun and very hands-on! It was full of enthusiastic schoolchildren when we passed by.

Most of the information on the various exhibits is in Danish and English. The very fine website is in Danish but it gives a good idea of the range of the exhibits.

← The Last of Her Kind
Seaflower: Turquoise Waters, Deadly Perils →

7 Comments on “A Jewel of a Museum: Orlogsmuseet”