An enticing selection of review copies of books arrived in my postbag recently, all from Seaforth. Each very different but together spanning three centuries, celebrating people and ships of the world’s navies, predominantly the Royal Navy.

“British Battleships. 1889-1904”
by R A Burt, Seaforth
Indispensable for students of the pre-dreadnought era, this is a revised reissue of the third of R A Burt’s magnificent trilogy on British battleships. As the author says in his preface, after the Battle of Trafalgar in 1805, Great Britain enjoyed a naval supremacy that was virtually unchallenged until the latter part of the 19th century. The Russian war scare of 1884 and the public’s anxiety about the Royal Navy’s ability to fight a modern war at sea, prepared the way for the Naval Defence Act of 1889 and a vast programme of warship construction. Over the next twenty years a fleet of fifty-two battleships was built. The book includes many new photographs and extensive tables and schematics as well as full technical history and careers of the ships.

A Biographical Dictionary of the Twentieth Century Royal Navy

“A Biographical Dictionary of the Twentieth Century Royal Navy,Volume 1”
by Alastair Wilson, Seaforth
This covers admirals of the fleet and others. It is the first volume of a major study intended to provide a resume of the service lives of every flag officer in the style of the great nineteenth century biographical dictionaries of Marshall and O’Byrne.
Accompanying the book is a CD (over 600,000 words) that contains the services histories and careers of 336 most senior admirals on the Navy List from 1900 onwards. A wonderful tool for historians and anyone interested in naval genealogy. (The records on the CD are fully searchable.) 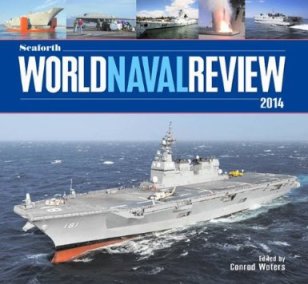 “World Naval Review. 2014”
Edited by Conrad Waters, Seaforth
Launched in 2009, this annual is an authoritative summary of happenings in the naval world during the previous twelve months. Nine expert contributors provide both national and global perspectives. Highlights of this issue include a survey of torpedo developments, analyses of significant new warship classes and German AIP technology. Extensive illustrations and photographs accompany the text.