Dan Abernathy asks: ‘What did the officers eat in Kydd’s day? How was it different from the men?’ 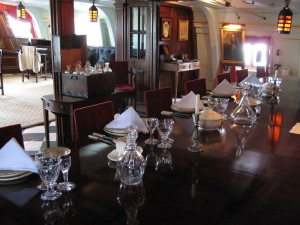 ‘Thanks for the question, Dan. Wardroom officers were entitled to the ordinary ships’ provisions provided for the seamen – unless they decided to subsidise their meals from their own pocket, which they almost invariably did. This was done by appointing a mess treasurer, who was responsible for ordering in extra stocks of food and wine, tea, sugar etc. It could be quite expensive – in Kydd’s day around £60 each per annum. Sometimes members of the mess who did not have private means (or prize money) were hard pressed to come up with their subscription!

Officers dined in some style. They were drummed to dinner to the tune of ‘Hearts of Oak’. As was the case ashore, dinner was in the ‘French service’ – a number of dishes (sweet and savoury) were placed on the table for each ‘course’.

The officers had their own cook; he was often quite skilled. With the advent of the Brodie Stove, the officers’ cook could produce pretty much what could be found at any fine table ashore.

Meals were served on a linen tablecloth with silver, candles and good china. Each officer had his own personal servant whose duty was to stand behind him and wait on him.
The captain dined alone, unless invited to be a guest of the wardroom mess.

The Georgian cookery writer Hannah Glasse devotes a whole chapter of her book, ‘The Art of Cookery’ to pickles, sauces, pies and other dishes ‘suitable for captains of ships’. The first entry is a recipe for ‘catchup’ that will keep 20 years!

One thing that intrigues me is the issue of a keg of ox tongues to captains on first commissioning a ship. Apparently the tradition continued well into the twentieth century! Ox tongue recipes, anyone?’

Do you have a question for AskJules? You can email me or send it via the Comments Box below. I’ll answer as many as I can in future blogs.