Hats Off to Clayton!

Vasa herself in the museum in Stockholm

Over the years I’ve bought several model kits but sadly never got around to finding the time to build them – and in the end I gave them away. Perhaps this is something I can take up when I retire from writing books! Hopefully a little while hence, though…

I have great admiration for the patience and dedication of people who make models, especially scratch modellers.

One such is U.S.-based Clayton Johnson who undertook the heroic task of recreating a 1:50 scale model of the Swedish ship Vasa as she was on the day she was lost on her maiden voyage, August 10, 1628.

Vasa was to be the mightiest warship in the world, armed with 64 guns on two gundecks. Her cost had been equivalent to 10 percent of her country’s annual harvest. And she heeled and foundered just 90 meters from shore…

She was discovered in 1956, and following a massive marine archaeological recovery programme she broke the surface of Stockholm harbour in 1961 after 333 years on the sea bottom. Now the vessel is the stunning centrepiece of the Vasa Museum in Stockholm. 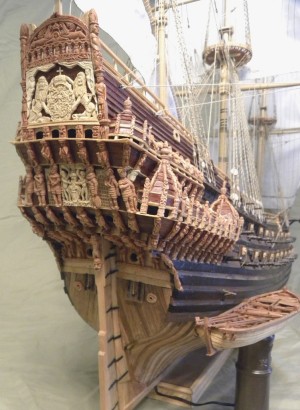 Clayton was keen to have his model of Vasa in all her splendour on the day she was lost (hundreds of sculptures and ornaments decorated the ship; she blazed in bright colours of gold, green, red and blue.)

The model took him over seven years to complete!

Clayton takes up the story: ‘The origins of the Vasa model go back to when I was a very young child, probably of eight or nine, and my fascination with historic ships began. My father was an enlisted man in the U.S. Navy for a time and my grandfather spent a whole career in the U.S. Navy. There were always books lying around the house that were nautical in nature.

Even though I had never gone to sea, and spent my youth as a farm boy, my interest was sparked. One particular book called Men, Ships, and the Sea contained a compilation of nautical articles from National Geographic. One of these explained some aspects of the archaeology of Vasa. I was fascinated and remember to this day the very inaccurate, although still impressive, painting that represented Vasa in the introduction.

This book was produced before they had started to put Vasa back together in 1973. I remember pictures of the head diver on the Vasa project, Per Edvin Falting eating 333-year-old butter which inflamed his mouth! Also giving me inspiration was the fact that my father built several plastic ship models of clipper ships such as Cutty Sark and Thermopylae. I started building ship models around the age of 10 and have continued ever since.’

I’m proud to have a little piece of Clayton’s work in my home. When one of my readers, John Thomson, built and then presented me with a wonderful model of Kydd’s first command, Teazer, I found out the intricate little figurehead had been carved by Clayton.

Clayton’s certainly not rested on his laurels. He has crafted firearms models, including a matchlock musket after one from Vasa in .62 caliber; carved Streiff, the royal warhorse of the Swedish King Gustavus Adolphus – and completed many other projects.

4 Comments on “Hats Off to Clayton!”