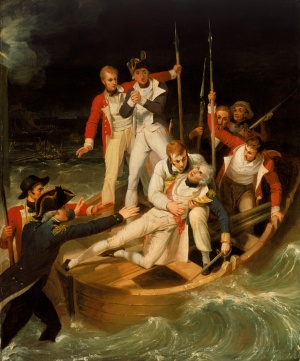 I have to confess that I’m a bit squeamish about all things medical. I love to read about a rattlin’ good Age of Sail sea battle and immerse myself in the tactics and sailing conditions – but then there’s the aftermath, the deaths and injuries, the amputations…

In Georgian times many wounded sailors didn’t survive the surgeon’s saw, even though a limb could be amputated in just one and a half minutes! If shock or loss of blood didn’t kill them, infection often did.

This day in 1797 Horatio Nelson lost his arm after a desperate shore assault at night. He was struck by a musket ball; a tourniquet fashioned by his stepson probably saved his life.

Nelson was rowed to HMS Theseus where his right arm was amputated high up near the shoulder. The operation was performed without anaesthesia, and it is unlikely that he was given rum to dull the pain as alcohol was said to interfere with the clotting of the blood.

A reconstruction of a surgeon’s table in the orlop

In typical Nelson style, within a short time of the surgery he was issuing orders to his captains. The wound, however, took many months to heal as one of the ligatures used during the operation, which normally fell out after a few weeks, remained in the wound, causing infection and great pain.

After the amputation he sometimes experienced the sensation of a phantom arm. Nelson nicknamed his stump ‘my fin’ – and it was said that it twitched if he was angry or agitated. His officers would then warn: ‘The admiral is working his fin, do not cross his hawse!’

Horatio Nelson had a wry sense of humour about his infirmity. When the landlady of the ‘Wrestlers Arms’ in Great Yarmouth asked permission to rename her public house ‘The Nelson Arms’ in his honour, Nelson replied: That would be absurd, seeing I have but one.’

Copyright notices
Painting: Richard Westall [Public domain], via Wikimedia Commons
Every effort is made to honour copyright but if we have inadvertently published an image with missing or incorrect attribution, on being informed of this, we undertake to delete the image or add a correct credit notice

← In Praise of Pies
From a BETRAYAL reader… →