Over the coming months I’ll be celebrating the earlier titles in the Kydd Series, it’s Command for this blog. I’d love to hear your thoughts on the book, either as a first-time reader or if you’re a re-reader and have read it more than once! It’s very gratifying for an author to be told that his work has inspired people to go back an read it again. And some of you have told me you have done this more than twice! Either reply to this blog or email me. Every respondent goes into the hat for a chance to win a genuine eighteenth century maritime artefact. 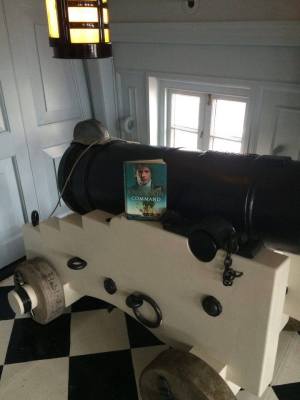 ‘At the outset of Command, seventh in the Kydd Series, the hero seems poised to watch his promising career spiral down the drain. But just when the ire of Thomas Paine Kydd’s old adversary seems to have wrecked his chances, a great stroke of fortune restores them, and Kydd finds himself the delighted commander of a sloop of war named Teazer. He is quickly confronted with all the challenges of command, from scraping together a crew at Malta and trying to rectify the ship’s light armament, to instantaneous decisions in the face of the enemy. Sometimes he blunders, other times he is undone by sheer bad luck, but he learns quickly, and with the occasional stroke of good fortune, finds that his leadership and judgement are up to the challenge. Just when he wins the sort of distinction that should lead to further advances in his career, he is undone by the direst turn of events that can befall a professional fighting man: the outbreak of peace. Soon Kydd is sculling hopelessly in a backwater, desperate for some way to return to the sea. When his chance comes, it involves a dispiriting compromise. But he is on his way once more, to the far side of the world, where he will play a role in exploring a new continent. In the meantime his friend Renzi, recovered from a near-fatal fever, is caught up in another clash between his idealistic dreams and the harsh realities of an unfamiliar land.

Once again author Stockwin provides well researched views of odd corners of the world at the dawn of the nineteenth century, as he spins out action sequences informed by a keen understanding of the details that made the crucial difference between life and death in combat during the Age of Sail. Command is an apt title, the right word both for Kydd’s latest step forward and for his creator’s mastery of historical detail and the storyteller’s art.’ – HistoricalNovels.info 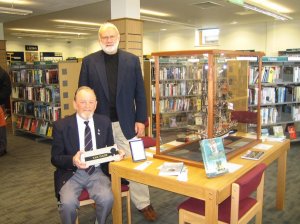 CPO Hart admires a model of Teazer. He actually served in her namesake

In Command, Kydd sails south from New South Wales to Van Diemen’s Land to look into reports that the French are interested in establishing a colony there. The Dutch explorer Abel Tasman was the first European to land on these shores in 1642. He named the island Anthoonij van Diemenslandt, in honour of Anthony van Diemen, the Governor-General of the Dutch East Indies, who had sent Tasman on his voyage of discovery. Van Diemen’s Land was not known to be an island until Matthew Flinders and George Bass circumnavigated it in Norfolk in 1798-99. The name of the island and colony was officially changed to Tasmania on 1 January 1856. 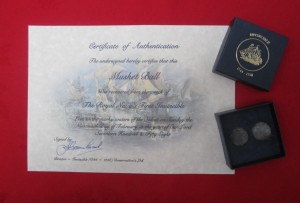 One lucky winner will receive this prize!

Trim was a ship’s cat, much beloved of the navigator and cartographer Matthew Flinders. Born in 1799, aboard a ship ’roundabout’ on a voyage from the Cape of Good Hope to Botany Bay, the kitten fell overboard, but managed to swim back to the vessel and climb aboard by scaling a rope. Taking note of his strong survival instinct and intelligence, Flinders and the crew made him their favourite.

Trim sailed with Flinders in HMS Investigator on his 1801-03 voyages of circumnavigation around the Australian mainland, and survived the destruction of Porpoise on Wreck Reef in 1803. When I wrote Command I took special delight in having my fictional hero Thomas Kydd meet Flinders – and Trim – in the penal colony of New South Wales.

A real piece of history!

A special prize this time, a boxed set of musket balls retrieved from HMS Invincible, a 74 gun ship-of-the-line wrecked in the English Channel in 1758 off Selsey Bill, en route to Canada to rout the French in Quebec.

Either reply to this blog or email me. Every respondent goes into the hat for a chance to win this genuine eighteenth century maritime artefact.

Previous blog on Command : The Watershed Book
Command has been published in the UK/US in English, various foreign languages and in ebook, large print and audiobook. The cover of Command is also available as a superb Limited Edition print
Buy on Amazon or The Book Depository (free postage worldwide!) Also available at most bookstores.
Detailed list

Copyright notices
Command aboard VICTORY by Paul Waite
Every effort is made to honour copyright but if we have inadvertently published an image with missing or incorrect attribution, on being informed of this, we undertake to delete the image or add a correct credit notice